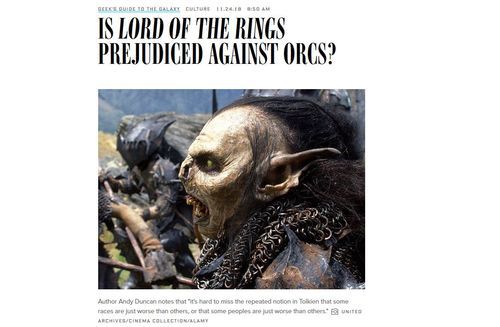 Lord Of The Rings Is Racist Again

The Lord of the Rings, as many posters on /tv and others would likely admit, could never be made again. Partially this is because everything today is constructed via green screens and computer generated special effects. Yet it's more because LOTR was made at perhaps the last time casting, atmosphere, cinematography, and the overall aesthetic of a film were ranked above the narrative advanced by it. Social Justice Warriors simply did not have the influence over culture and media they way they do today, and journalists were not as fanatical about narrative policing.

Yet even then, as Sam Francis observed all the way back in 2004, some critics (including the SPLC) were calling the films and J.R.R. Tolkein's work "racist."

At the time, even the respectable right mocked this. As Jonah Goldberg noted in 2003:

One is tempted to ask who is the real racist here? On the one hand we have people — like me — who see horrific, flesh-eating, dull-witted creatures with jagged feral teeth, venomous mouths, pointed devilish ears, and reptilian skin, and say, “Cool, Orcs!” On the other hand we have people, like Mr. Yatt, who see the same repugnant creatures and righteously exclaim “black people!” Maybe he should spend less time vetting movies for signs of racism and more time vetting himself if, that is, he free-associates black people with these subhuman monsters.

However, the goalposts have shifted in the years since. Now, it's not that Tolkien was somehow equating the evil creatures he had invented with black people. It was that he was actually racist against orcs themselves; that is, he was guilty of racism against the creatures he invented for a fantasy novel.

“‘Senator Bilbo’ is this parody in which you have this racist demagogue stomping around the world of the halflings, in a sort of desperate holding pattern to keep at bay all the change that is coming about as a result of what seems to have been the War of the Ring,” Duncan says in Episode 336 of the Geek’s Guide to the Galaxy podcast.

The story, which appears in Duncan’s new collection An Agent of Utopia, was also inspired by Michael Moorcock, who has criticized Tolkien for depicting creatures such as orcs, trolls, and goblins as intrinsically evil.

“Senator Bilbo” first appeared in 2001, but its references to border walls and a “Shire First” policy make it seem more relevant than ever.

Most pop culture today is entirely derivative. It mostly consists of thinking of new ways to call what superior people created problematic and racist. So Duncan's rent seeking isn't exactly uncommon. But it's worth noting that:

1) Yes, the orcs were inherently evil and were a product of evil

If there was one thing that our society embraces today "too much," it's not that "some races are just worse than others," it's that races and peoples are completely interchangeable and that simply having people migrate in unlimited numbers has no negative consequences. No one actually believes this in their own personal life, as shown by where most people choose to live, send their kids to school, or associate with. But for some reason, we elevate a nonsensical idea to the status of a moral commandment, and now we build crappy derivative fiction on top of it.

True culture is rooted in something organic and real, which is why LOTR was so meaningful to so many people.

No wonder they hate it.