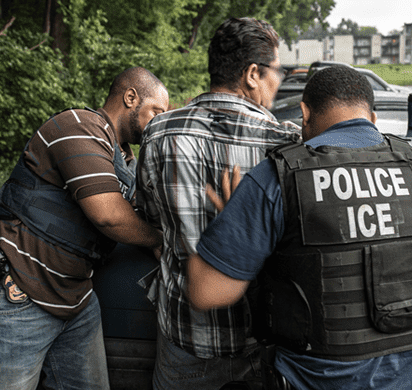 Mark Krikorian tweets this in response to an ICE press release:

Did any of them happen to be, y'know, illegal aliens? https://t.co/Wr0htszZR8

This is is not as bad as the petty cases Federale calls "ICE SVU"--these are people who've committed real crimes overseas, and as a result, been adjudged deportable. (That's why they say they're "fugitives.") That means that ICE is, in a modified, limited way, actually doing its job.

Right. Bad people from bad countries. (I wish they'd at least name the countries.) But they're all people who've been bad overseas, although one Central American is also a drug gangster in America. ICE further announced that

ICE is committed to rooting out known or suspected human rights violators who seek a safe haven in the United States. ICE's Human Rights Violators and War Crimes Center investigates human rights violators who try to evade justice by seeking shelter in the United States, including those who are known or suspected to have participated in persecution, war crimes, genocide, torture, extrajudicial killings, and the use or recruitment of child soldiers. These individuals may use fraudulent identities to enter the country and attempt to blend into communities in the United States.

Right! And they do that as part of legal immigration—you can't wade to the US from Yugoslavia. So the ICE, which has stopped deporting illegals, has found some legal immigrants to deport.  It's part of what both Ann Coulter and Paul Nachman wrote recently—the problem with immigration isn't that it's illegal, the problem is who's coming legally.