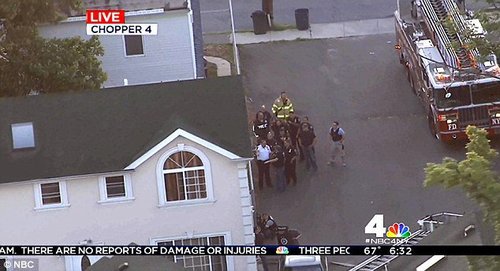 Another question for the #blacklivesmatter types: where does this one fit?

East Coast leader of Bloods killed after shooting firefighter who served on 9/11 -press conf in 5mins http://t.co/RSMH3fB29R via @MailOnline

A New York City firefighter was shot twice Friday morning during a standoff at a Staten Island apartment that ended with the suspect being killed in a firefight with police, authorities said.

The six-hour standoff with Garland Tyree, 38 years old, began when U.S. Marshals attempted to execute an arrest warrant in connection with an alleged federal probation violation. The authorities encountered smoke at the home at 15 Destiny Court, prompting a call to the Fire Department of New York.

Responding firefighters were met with gunfire, and a 53-year-old FDNY lieutenant, James Hayes, was shot in the buttocks and right calf, authorities said. He was in stable condition at Richmond University Medical Center.

Police had been negotiating with Mr. Tyree, who barricaded himself in the apartment with an assault rifle, authorities said. The standoff ended around noon after several shots were fired, setting off screams among neighbors and family members who were trying to help police get Mr. Tyree to surrender.

Mr. Tyree was killed in the shootout, a law-enforcement official said. No one else was in the apartment with Mr. Tyree, police said.

The incident began to unfold around 5:45 a.m. as federal marshals joined by police officers tried to arrest Mr. Tyree, said NYPD Chief of Detectives Robert Boyce. Mr. Garland has been on probation since July 2014.

It wasn't immediately clear why Mr. Tyree was on probation or what he allegedly did to violate his probation.

Probably something more serious than selling untaxed cigarettes to minors.