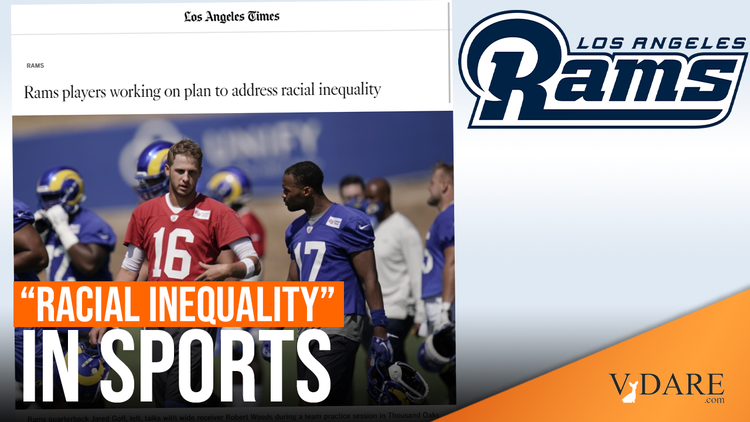 They are going to start a South Asian at cornerback?

Actually, one of the last nonblack players to start at cornerback was Kevin Kaesviharn, who played some cornerback in the early 2000s before getting shifted to safety. He’s half-Thai.

One of the really strange things in football history that nobody remembers is that the NFL had a league Most Valuable Player in the 1960s who was half-Filipino: the Los Angeles Rams’ quarterback when I was a kid, Roman Gabriel.

Another odd thing was that Gabriel was perhaps the first giant quarterback at 6’5″ and 225 pounds, which is still a big QB today and was huge then. So, I don’t imagine his father was all Southeast Asian but might have also been part conquistador.

He threw the football extremely hard, which meant he wasn’t intercepted often: only 7 times in his 1969 MVP year to go along with 24 touchdown passes in 14 games. But his hard-spinning throws were difficult for his receivers to catch: only a 54.4% completion percentage that year.

Maybe the reason I never got hung up like everybody else on white vs. black was the diversity of quarterbacks in the 1969 football season from my 10-year-old perspective in Southern California. In Los Angeles, the Rams had Gabriel, the USC Trojans had a black quarterback, Jimmy Jones, and UCLA a white QB, Dennis Dummit. Among rivals, the Minnesota Vikings, who beat the Rams in the playoffs, were quarterbacked by Joe Kapp, a half-Mexican guy from the San Fernando Valley. And Stanford was led by Jim Plunkett, who is an Old New Mexican, part-Hispanic and part American-Indian.