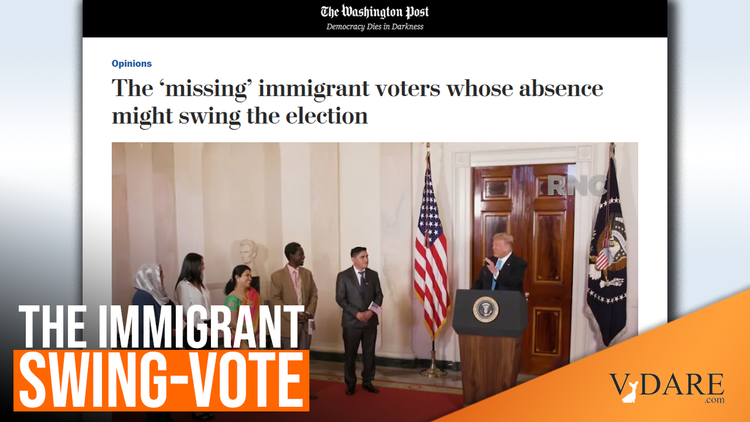 WaPo: Trump Stealing Election by Not Ignoring COVID to Rush Naturalization of Immigrants

The ‘missing’ immigrant voters whose absence might swing the election

… Meanwhile, in a truer reflection of President Trump’s immigration record, an estimated 200,000 to 300,000 other would-be citizens are likely to be disenfranchised.

The absence of these hundreds of thousands of “missing voters,” many of whom live in swing states, could be sufficient to sway the election.

To be fair, the pandemic has made the work of all organizations more challenging. The agency that processes naturalization applications is no exception. U.S. Citizenship and Immigration Services offices were shuttered from March through early June, and since reopening have operated below capacity to accommodate social distancing. …

Hundreds of thousands more immigrants are just a step or two behind these newly minted citizens. In a normal year — and perhaps under a less hostile administration — these people would already have been background-checked, fingerprinted, interviewed, approved and “oathed” by now, but they haven’t been, because of office closures and persistent productivity slowdowns.

… Vanessa Solomon, a nurse from Saint Martin who works in a covid-19 intensive care unit in Texas, is further along. After one interview cancellation, and months of delays, Solomon was finally interviewed — and approved! — for citizenship last Friday.

Her “huge sense of relief,” unfortunately, was followed by deep disappointment.

Notification of her oath ceremony won’t even arrive for four to six weeks, she was told, and the ceremony will occur sometime in subsequent months. Meanwhile, Texas’s voter registration deadline is Oct. 5. She had been eager to vote for Democratic vice-presidential candidate Kamala D. Harris — who, like Solomon, is a Black woman of Caribbean heritage.

In contrast, when the Clinton Administration rushed a huge number of immigrants through to voting status in 1996, that was what America is all about.