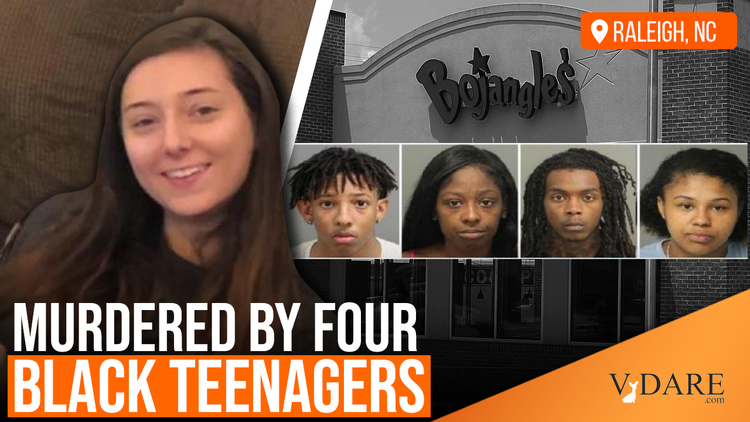 Earlier: Her Name Is Heather Perry: White Woman Murdered in Denver by Black Male Released from Jail Early Because of Coronavirus Concerns

For roughly nine years, this site has documented individuals and the crimes/violence taking their lives. Many of them you’d never read about were it not for Paul Kersey. Something has changed over the 2020 Summer of Black Lives Matter/Bolshevik Terror, completely upending the carefully maintained garden of lies our corporate media and (a)moral betters tend to on a daily basis, desperate to keep the reality of interracial crime/violence/murder hidden amongst the exceedingly few weeds of white on black violence.

Few people had their ears to the railroad tracks to see if the train of vengeance was finally coming on the issue of race and crime as me, and though over the years there would be moments where you could almost hear the rumblings of righteousness, they’d fade into the abyss.

Starting around Memorial Day weekend of 2020, the awakening started. It was slow at first, but you could feel it when you walked in a city destroyed by Bolshevik protestors (as I silently did), with monuments toppled and demonic graffiti spray painted on federal buildings and on museums. It was atavistic, as if the ghosts of the past cried out for retribution, knowing only a few in the present could restore order for their posterity.

It was spiritual in a sense, knowing so much was going to fall, but that every monument toppled could be replaced to its former luster and glory if we persisted through the evil gripping the nation.

Because to survive undaunted in the face of not only tyranny and persecution, but annihilation, is the ultimate form of protest.

That’s always been our job. Not to reform the system, but to survive its demise and rebuild (what Heinlein knew was coming when he wrote Starship Troopers and understood a fundamental shift in morality must occur for mankind to persist in building a bridge to the stars).

You never know what individual will awaken to the reality of dispossession until they read a story rocking them to their very core. That was always the goal of Paul Kersey, especially after the murder of my friend Brittney Watts.

I should have stopped in 2011, but what happened to Brittney haunted me daily.

The past few months have been quiet from me, but they will no longer be. A silent promise I made to Brittney’s memory back in 2011 must be kept.

Her Name is Veronica Lee Baker.

RALEIGH, N.C. (WNCN) – Four teens, including a juvenile, have been arrested and charged in connection with the murder of a 17-year-old girl who was found dead in a car outside a Raleigh Bojangle’s last weekend.

Police said Tuesday night that three teens, Keyshara Michelle Deans, 19, Nezyiha Zamir Collins, 19, and Tyreek Qumay Rogers, 18, were all arrested and charged with accessory after the fact to murder.

Authorities were still looking for 17-year-old Devin Cordell Jones. A juvenile petition and secure custody order for the murder of Veronica Lee Baker were being sought for Jones. On Wednesday morning, the teen was taken into custody and charged with Baker’s murder.

Deans is being held on a $1,015,000 secured bond for multiple charges, some of which date back to June and don’t appear to be related to Baker’s murder, according to arrest records. Deans’ arrest warrant says that she drove Jones from the scene of the murder in order for him to evade capture.

Just after 8:15 p.m. Saturday, a caller reported finding a girl lying inside a car in the parking lot of the Bojangles’ at 3920 Jones Sausage Road.

“She’s not breathing. I tried to shake her and everything else. It’s just not, no response. No nothing,” said the caller, adding that the car was running with the lights on, doors open, and a set of keys inside.

A second person heard on the call said the car has been the parking lot for some time, but they initially didn’t realize something was wrong.

“I went on lunch. I went on my break a minutes ago, sir, and when I came back the door was open. I didn’t pay no attention,” the person said.

Friends and neighbors described Baker as sweet and lovely. They said she had her whole life ahead of her. Baker graduated from Garner Magnet High School in June.

The 17-year-old murdered was a white female teenager. All of Veronica Lee Baker murderers were black.

Her story has made the rounds, as are many others. The tide is turning.

Her Name is Veronica Lee Baker.

Rest in peace, Veronica. People across this nation who never knew you in life, now know how your life was taken. How the promise of your life was extinguished, all because we must persist in believing a “color blind” society is our ultimate goal.