Earlier, by Lance Welton: Does The West Have A “Genetic Interest” In Supporting China’s Uyghurs?

The Eurasian Steppe, the grasslands extending (with interruptions) from Hungary to Manchuria, is one of the world’s more important geographic features. 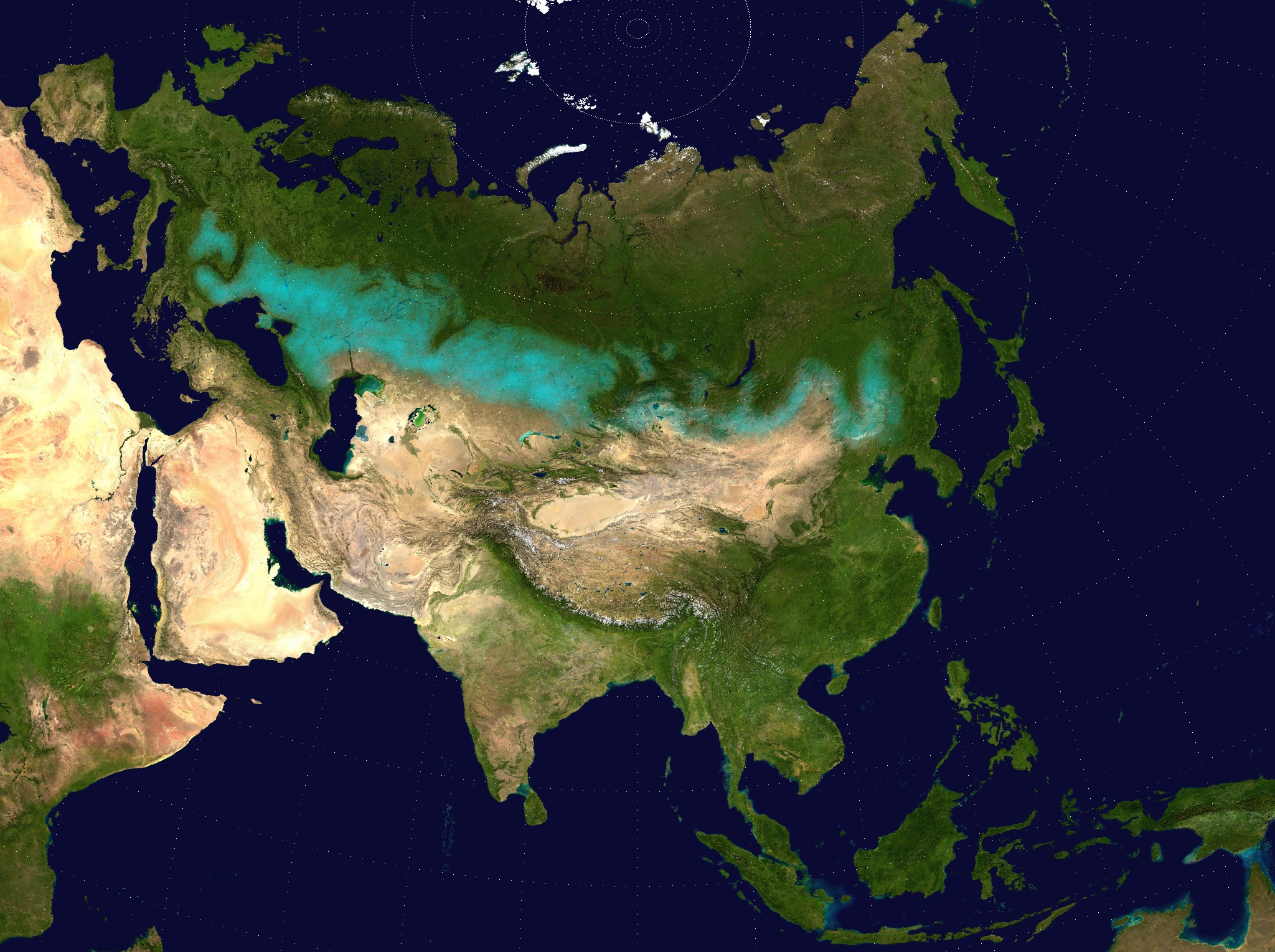 On horseback, it’s relatively easy to get around on since your horses have plenty of grass to eat, unlike in forests where feeding horses is troublesome. The main problems are other people on horseback, plus the occasional gigantic Asian mountain range.

Not surprisingly, there has been gene flow over the centuries back and forth between East Asia and Europe. For example, a couple of my friends in high school who were of European descent, one Hungarian, one Russian, had slightly East Asian looking eyes.

On the other hand, perhaps it’s surprising how little gene flow there has been.

One thing to keep in mind is how low the population density is in the middle of Eurasia north of the Himalayas. Most people who live in northern Eurasia live either at the European end or the East Asian end. This makes it less relevant to consider northern Eurasia as one giant racial cline and more relevant to think of it as primarily comprising two distant races. A 2015 paper in Scientific Reports (thanks to iSteve commenter Anti-HBD) looked at current (not ancient populations) and tried to estimate admixture by treating the French as representative Europeans and the Dai of Southern China (and also of Laos and Thailand) as representative East Asians.

Some groups, such as the poor Uygurs of western China and the Hazara of central Afghanistan (who trace their ancestry to the Mongol invasion) are visibly hybrids of East Asians and West Eurasians. But the same is slightly true for many other groups, especially in the north of Eurasia.

Strikingly, the study finds the concept of a European race versus an East Asian race to be highly useful for measuring admixture. Paradoxically, to collect evidence for admixture, you need the concept of racial difference.

Abstract
Historical records indicate that extensive cultural, commercial and technological interaction occurred between European and Asian populations. What have been the biological consequences of these contacts in terms of gene flow? We systematically estimated gene flow between Eurasian groups using genome-wide polymorphisms from 34 populations representing Europeans, East Asians and Central/South Asians. We identified recent gene flow between Europeans and Asians in most populations we studied, including East Asians and Northwestern Europeans, which are normally considered to be non-admixed populations. In addition we quantitatively estimated the extent of this gene flow using two statistical approaches and dated admixture events based on admixture linkage disequilibrium. Our results indicate that most genetic admixtures occurred between 2,400 and 310 years ago and show the admixture proportions to be highly correlated with geographic locations, with the highest admixture proportions observed in Central Asia and the lowest in East Asia and Northwestern Europe. Interestingly, we observed a North-to-South decline of European gene flow in East Asians, suggesting a northern path of European gene flow diffusing into East Asian populations. Our findings contribute to an improved understanding of the history of human migration and the evolutionary mechanisms that have shaped the genetic structure of populations in Eurasia.

Introduction
… Previous studies have revealed that the populations of Central Asia, such as Uygur, are typically admixed with genetic contributions from both European and East Asian populations. …

Here we present what is, to the best of our knowledge, a systematic investigation of genetic admixture between different European and Asian populations using genome-wide single nucleotide polymorphism (SNP) data from 34 populations, including seven European groups (EUR), 9 Central or South Asian groups (CSA) and 17 East Asian groups (EAS) and one Tibetan group from Tibet Plateau. Based on statistical analysis using 4 Population Test (f4-test) and 3 Population Test (f3-test)10,11, we detected gene flow between Europeans and Asians were prevalent for most populations including even those from west-northern Europe and East Asia which have been generally regarded as less admixed. …

In total, 1,132 Eurasian samples with 186,506 SNPs integrated from different technical platforms were used for analysis (see Methods). …We observed that some clusters of West and East Eurasians are slightly shifted towards each other, indicating potential admixture between them (Fig. 1). There is a clear ‘cline’ between West and East clusters. These shifts of PC patterns are especially obvious for most CSA, some northern EAS including Mongolian, Xibo, Hezhen, Oroqen etc. and eastern EUR including Russian, Finnish and Adygei. … these CSA (such as Uygur, Haraza, Pathan, Burusho, Kalash and Sindhi) are typical admixed populations with a high level of gene flow from both EUR and EAS ancestries. Different from other CSA, Makrani showed significant signal of African ancestry. And there was no admixture signal for Brahui.

… The results (Table 2) revealed that CSA, located in the middle of the Eurasian continent, mostly are typical admixed populations with a high level of gene flow from EUR and EAS ancestries. Uygur from Northwest China exhibit 52.4% EUR ancestry. For those populations from Pakistan, Pathan exhibits 78.4% EUR ancestry. Burusho and Hazara have 67.9% and 50.2% EUR ancestry, respectively. Admixture proportions for some CSA are relatively small, for which Kalash has 20.7% EUR ancestry, Sindhi 11%, Balochi 2.1%.

Keep in mind, however, that 2015 was a long time ago in population genetics …