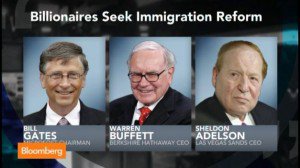 When a true genius appears in the world, you may know him by this sign, that the dunces are all in confederacy against him.” — Jonathan Swift

What does it say when almost all the billionaires are in a confederacy conspiring to get cheaper labor from you?

AMERICAN citizens are paying 535 people to take care of the legislative needs of the country. We are getting shortchanged. Here’s an example: On June 10, an incumbent congressman in Virginia lost a primary election in which his opponent garnered only 36,105 votes.

Adelson ($28.5 billion in net worth according to the Forbes 400), Buffett ($58.5 billion), and Gates ($72.0 billion) don’t even have the guts to mention Professor David Brat by name, much less admit the galvanizing innovation of Brat’s campaign: explicitly running against “immigration reform” because it’s a Cheap Labor policy benefiting crony capitalists.

Immediately, many Washington legislators threw up their hands and declared that this one event would produce paralysis in the United States Congress for at least five months. In particular, they are telling us that immigration reform — long overdue — is now hopeless.

Americans deserve better than this.

Adelson, Buffett, and Gates want to give you Americans what they think you deserve, good and hard.