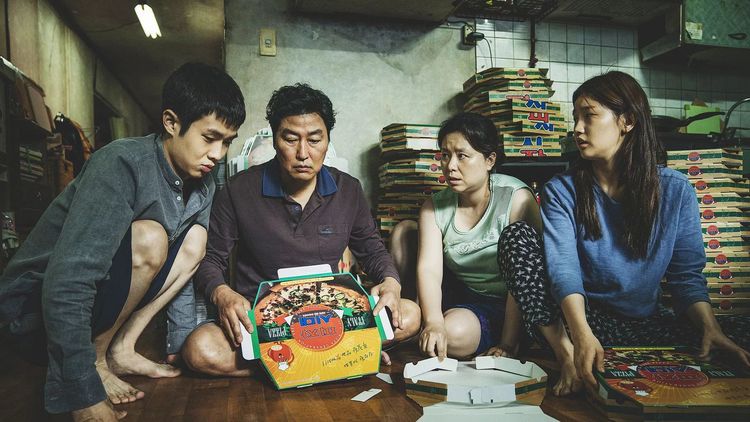 Parasite is an acclaimed film by the most popular movie director in South Korea, Bong Joon-ho, who has made The Host and Snowpiercer.

The trailer makes it appear to be a horror movie, but it’s not. This movie is about a very poor but close family of four in Seoul. The son fakes his way into a job tutoring the heiress of a very rich family, and then gets his sister hired under a pseudonym as an acclaimed art therapist for the young scion. They plot to get the chauffeur and housekeeper fired and their mom and dad hired in their places.

About halfway through there is a fun plot twist and then a fair amount of violence at the end (about as much as Once Upon a Time in Hollywood, but less entertaining).

Bong is a proficient director, but I didn’t like his Snowpiercer much at all and only liked this one a little more. None of the characters, poor or rich, seemed all that sympathetic.

One problem with watching a movie about class conflict in a foreign language is that I can’t tell from the accents what is going on in terms of class. It’s more fun to watch an English movie about class, such as My Fair Lady, because I can at least rank the accents by class from high to low. But I don’t have a hint about Korean accents.

The family lives in a terrible basement apartment, acts prole, and takes on bad jobs like folding pizza boxes. But then the son and daughter show up at a CEO’s mansion and immediately dazzle the rich mom with their supposedly American-educated expertise in child development. I presume they adopt different accents when talking to the rich folk than they use in their squalid home, but I can’t tell that from watching the movie.

But how did they learn those prestigious accents? Moreover, if they can speak in educated accents, why can’t they use them to get better jobs than folding pizza boxes, such as in sales? I imagine Koreans can fill in more of the gaps, but for a clueless roundeye like me, it was a pretty thin experience. For all I know, Parasite might be the most sophisticated movie ever made about class in South Korea, but I didn’t learn anything from it about class in Korea other than that Koreans think American stuff is cool.

There are a few laughs in the movie, such as when the daughter dazzles the rich Korean lady by mentioning her cutting edge education in art therapy at Illinois State. I presume a lot of Korean references went over my head.