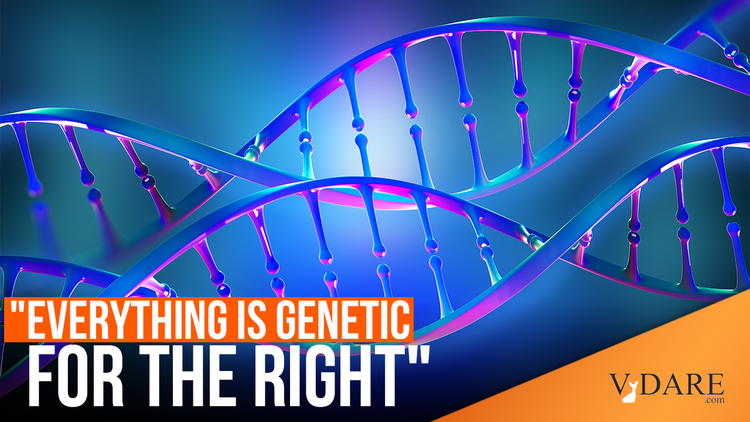 “Everything is environmental for the left except gays, where it’s totally genetic; and everything is genetic for the right, except for gays,” [Sullivan] said sarcastically.

I'd dispute the claim that "everything is genetic for the right"—people on the right recognize that both genetics and environment play important roles in human outcomes.

More interesting for me is Sullivan's assertion that "everything is environmental for the left except gays," because it brings to mind some musing on the subject from the late Lawrence Auster, in 2012:

As Sam Dickson put it at the 1994 American Renaissance conference, liberals believe that the entire biological world is determined by the mechanics of heredity, except for the one little part of the biological world that’s inside the human skull.

But wait. More recently liberals have added an exception to their exception. They say that the inside of the human skull is completely free of genetic determinism, except insofar as it makes some people homosexual. Unlike everything else about human mentality, the disposition to homosexuality is strictly genetically determined. Homosexuals have no more choice over their homosexuality, than sycamore trees have over being sycamore trees.

Larry was unsurpassed in seeing to the essences of things and stating them memorably.  (I think of what's above as his "sycamore" statement.)  How I miss him ...