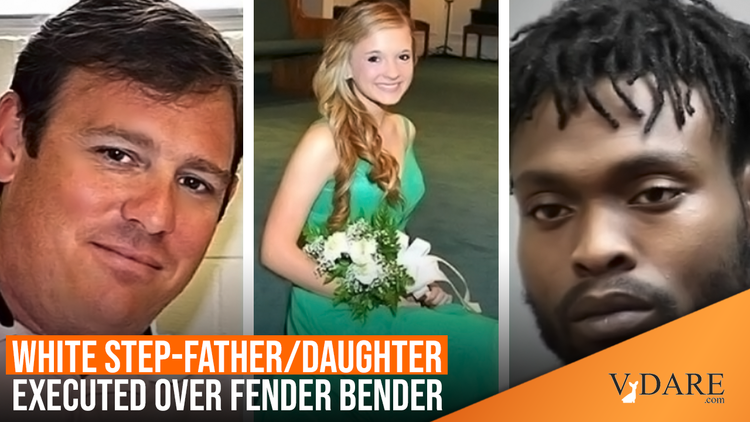 The United States of America is a big country, with more than 330 million people.

Why should the death of a black male such as George Floyd or a Jacob Blake become a casus belli for a war on a society riddled with purported systemic racism/white privilege/white supremacy/implicit bias/institutional racism, when the murder of two white people by a black male is greeted by extreme silence by this same society?

If America truly is a nation fueled by the evils of systemic racism/white privilege/white supremacy/implicit bias/institutional racism (as we are constantly told by those in total control of corporate media/public corporations/academia/and professional sports franchises), then why is the story of Laura Anderson and Charles Wall not dominating the news cycle and ushering in emergency legislation to castigate all black people for their callous murder?

Because if America were truly awash with systemic racism and implicit bias, how they died and who murdered them would be the only story we’d hear/read about.

That few will never read about how they died and who murdered them is a reminder of the power of black privilege in America.

South Carolina college student, stepfather fatally shot in head on front lawn over fender bender: The stepfather was dropping off a set of keys for his daughter, Fox News, August 27, 2020

A South Carolina college student and her stepfather were shot dead on the front lawn Monday in a road rage-related attack after a minor fender bender in the driveway.

Laura Ashley Anderson, 21, and Charles Nicholas Wall, 45, were killed outside a home in Georgetown, S.C., which was recently purchased by Anderson, where she expected to begin her new adult life.

Ty Sheem Walters III, 23, allegedly rear-ended Wall as he turned into the driveway of the home near the intersection of Indian Hut Road and Highmarket Street, just off of U.S. 521, around 5 p.m., according to the Georgetown County Sheriff’s Office. He then allegedly got out of the vehicle and shot Wall, Anderson, and another person, WPDE reported.

“I’m having to bury one of my children and my husband. It’s such a freak thing. I don’t know why this would happen. I just don’t understand,” Kimberly Wall, Anderson’s mother and Wall’s wife, told WMBF. “It’s just devastating. I don’t know how we’re going to go forward.”

Anderson was in the front yard waiting for Wall to arrive to drop off a spare set of keys. After just moving in, she was selling an old set of bunk beds online and had realized she was locked out when she came to meet the potential buyer outside her house, Lynn Lambert, a close friend of the family, told WPDE.

“I don’t understand how a simple fender bender they called it could turn into double murder and an attempted murder,” Lambert said. “Why? I honestly didn’t think it was real. Who does this?”

Kimberly Wall told a judge Wednesday the shooting happened just three miles from where she lives and that Walters took away two of her “best friends.” The judge denied bail for Walters, who is charged with two counts of murder, one count of attempted murder and the illegal possession of a firearm.

Law enforcement arrived at the scene to find one victim had already been taken to the hospital, a second was being treated by first responders, and a third was walking around dazed and confused with a gunshot wound to his left wrist, WMBF reported, citing the incident report. Wall was shot at least twice in the head and torso. Anderson was shot at least once in the head.

Police established a perimeter before setting out to look for Walters, who fled on foot down Kent Road. Walters was spotted walking on Georgetown Highway toward Andrews, and took off running through the woods when approached by officers. After a brief foot pursuit by officers and a police K-9 unit, Walters was taken into custody around 6:30 p.m., Georgetown Times’ Post and Courier reported.

Her Name is Laura Ashley Anderson/ His Name is Charles Nicholas Wall. Were we a society fueled by white privilege, you’d be encountering these two names wherever you went. Instead, all you read/hear about are the names George Floyd and Jacob Blake.