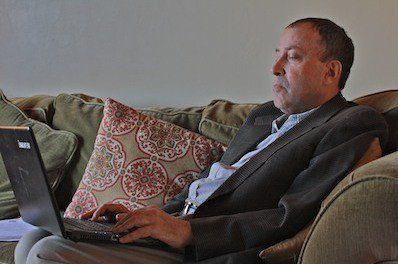 Early And Clearly, Lawrence Auster Saw Islam For What It Is

Thomas Martel's current article here (Lawrence Auster’s Legacy—Starting The Debate On Reversing Muslim Immigration, January 22, 2015) points VDARE.com readers to Auster's seminal warnings to us Westerners about Islam.  Martel specifically refers to striking talks on the subject — I was present for one of them — that Auster gave in 2009 and 2010.

But at least by late 2000 (nearly a year before the Islamic Crimes of September 11, 2001), Auster was already fully engaged in this subject.  That November 6, his article The Clintons, Abdurahman Alamoudi, and the Myth of "Moderate" Islam appeared at Newsmax.com.  (It's apparently no longer in Newsmax's online archives, but, providentially, it was reposted by a clearly impressed reader at Free Republic on September 14, 2001, and that made it possible to retrieve an Archive.org link.)

A brief excerpt from the 2000 piece demonstrates that Auster had already seen pretty much the whole picture:

One videotape of a meeting in New Jersey in 1993 showed Muslims chanting "we want the blood of Jews." In videos of Muslim summer camps in the U.S., young kids were saying "butcher the Jews." A man named Abdulla Azzam was shown speaking in Oklahoma City, Brooklyn, Atlanta, and Lawrence, Kansas, urging holy war against the West.[Note: This is Steven Emerson's 1994 PBS Video Jihad In America, see it here.]

Instead of denouncing these barbaric calls to violence by American Muslims, the respectable "moderates" on the Charlie Rose panel – Clinton ally Abdurahman Alamoudi among them – all denounced the documentary for provoking anti-Muslim feeling. Alamoudi insisted that Hamas is not a terrorist group. Most amazingly, he and his fellow "moderates" said that Americans should not feel threatened by extremist leaders addressing large Muslim audiences in this country calling for "Jihad of the sword" and chanting "Kill the Jews, kill the Christians."

Attempting to explain away that murderous rhetoric, another well-known "moderate" on the panel, the late Mohammed Mehdi of the American Muslim Committee (a frequent guest on William Buckley's "Firing Line" over the years), said that Muslims habitually use hyperbole, such as "I'll kill your grandfather," but that it doesn't mean anything and people shouldn't take it seriously.

But the ineluctable problem remains: If the members of a certain group routinely engage in or approve of such bloodthirsty threatening language, how can they realistically be expected to be participants in a Western democratic society based on common allegiance to reason and the rule of law?

And how can any Western society survive the inclusion of large numbers of such people in it?

"Ineluctable."  That's a word that sticks with you.

Auster became sole proprietor of the View From the Right blog (still fully available) in late 2003, and Islam's mortal threat to the West remained a main focus, perhaps the main focus.  (Googling on "site:amnation.com islam" yields 3,520 results, but I don't know if each of those hits refers to a separate blog entry.)

Besides the power of his ideas and of his broad and deep scholarship, Auster's writing had power.  For me, his most memorable passage — of many! — about Islam was the following:

We will have terrorist attacks and threats of terrorists attacks and inconvenient and humiliating security measures and the disruption of ordinary activities FOREVER, as long as Muslims are in the West in any significant numbers. The Muslim terrorists are part and parcel of the Muslim community. According to a survey reported in the Scotsman, 24 percent of Muslims in Britain (I never describe them as “British Muslims”) believe the July 2005 London bombings were justified. Imagine that. Not only do these Muslims in Britain support terrorism against Britain, they’re not afraid to say so openly to a pollster! The unchangeable fact is that wherever there is a sizable Muslim community there will be a very large number of terror supporters and therefore—inevitably—actual terrorists as well.

[Emphases in original: The Unchanging Reality of Muslim Terror — So Long As Muslims Remain Among Us, August 10, 2006]

Indeed, just a few days ago, Victor Davis Hanson (Muslims and Islamists: How do extremists relate to the population in which they live?, National Review Online, January 20, 2015) provided another example supporting Auster's theme that "moderate Muslim" may well be, as far as Western civilization is concerned, a null category:

Clearly polls are not the only evidence of the level of support for Islamic-inspired radicalism. More important can be the degree of passivity of the population. General Sisi of Egypt recently argued that the Muslim clerical establishment bore a great deal of responsibility for global Islamic terrorism, not because these clerics necessarily voiced support for it, but because they were unwilling or unable to mobilize Muslims against it. I can recall meeting with a group of Libyan exiles living in the United States in 2006, all of whom were highly educated, Americanized professionals. They voiced optimism that their former tormentor Qaddafi was liberalizing their country and offering hope of recreating a civil society even for secularized dissidents like themselves. But when I mentioned the then-current case of the Islamic attacks against those associated with the caricatures of Mohammed in the Danish magazine Jyllands-Posten, all four Libyans voiced unanimous approval of the violence against such blasphemers. And when I asked them about the then-recent suicide bombings in Israel, they again voiced support for such activities.

In other words, at least some Muslim professionals—e.g. all of Hanson's sample—are enthusiastic about modernity and civil rights for themselves. But if you diss their prophet, you're dead meat, or should be.