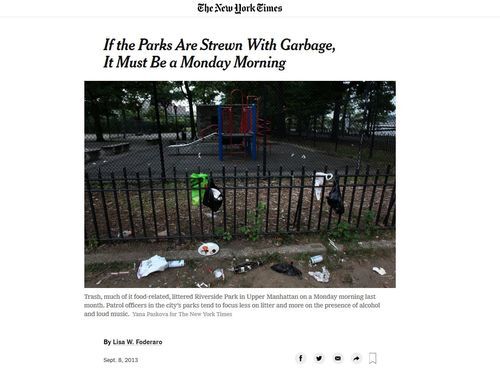 Latino Littering, While A Real World Problem, Is An Unknown Idea

If the Parks Are Strewn With Garbage, It Must Be a Monday Morning

All summer and into the fall in Upper Manhattan,

The concept of Upper Manhattan (e.g, Harlem) is hazy, but Upper Manhattan (as opposed to the Upper East Side and Upper West Side) traditionally started at 96th Street on the East. On the West Side, 108th St. was the usual boundary back in the Seinfeld Era.

barbecuers and picnickers flock to the Riverside Park waterfront on Saturdays and Sundays to enjoy the Hudson River views and breezes. Hundreds, sometimes thousands, of people descend on a grassy stretch in the northern part of the park where grilling is permitted. Carne asada and barbecue chicken sizzles, children run, tattooed arms bop volleyballs and couples watch the sun settle over New Jersey.

Then comes Monday morning, which presents a Sisyphean struggle for maintenance workers like Willie Fitzgerald — a weekly encounter with the paper plates, confetti, plastic straws and food scraps that wind up on the grass, along paths and under picnic tables. ...

Local residents who arrive in the park early on Mondays, before cleanup crews arrive, are greeted with a jarring sight. “At first you think a flock of sea gulls is spread out on the lawn, but it’s paper plates and cups and litter everywhere,” said Nancy Maldonado, 48, who was sitting on a rock by the river. “If this was their house, they would never do this. We need better enforcement.”

Despite such complaints, park officials say their options are limited. ... The officers, who carry clubs and mace, focus mainly on loud music and alcohol, which, he pointed out, were the source of even more complaints.

Littering regulations are difficult to enforce for a few reasons, especially when it comes to large groups of relatives and friends who remain in the park for hours. “For the officers, it’s time-consuming to observe, and then who are you going to give the summons to?” Mr. Castro said. “If you go into a large crowd and the person resists, arguments happen and things spin out of control.”

It's interesting to contrast this behavior to the Burning Man festival on a dry lakebed in Nevada, where the damn dirty hippies from Northern California remove at the end of the week every single thing they've brought, including their dirty water from washing dishes.

If you read this article closely, you can get a sense of who the prime littering culprits are ("carne asada" for Puerto Ricans, Dominicans, and Mexicans, "barbecue chicken" for African-Americans, etc.). But the sizable role of Latino culture in littering today is never explicitly mentioned.

It's not as if littering is some tragic flaw permanently inscribed in Latino DNA. It's a bad habit, a cultural defect. White Americans littered a lot during the postwar era when disposable containers and wrapping became widespread, so the manufacturers of the litter started a campaign to shame people into not littering. The culmination was that classic of racial shaming, the 1971 Crying Indian commercial showing how the White Man had made a mess of the Native American's landscape.

But, you can't shame any culture other than white Americans. Thus, when I Google the alliterative phrase "Latino littering" I just come up with references to my use of the phrase. Latino littering, while a real world problem, is just not a Thing in the ideasphere.

This is funny...all about how the parks in Manhattan are covered in trash every Monday morning...well not all the parks, but the ones in Upper Manhattan are.

I have been to parks uptown like the Dyckman Fields which on weekends are filled with a thousand drunk Mexicans watching soccer games and buying tacos from illegal food vendors.  Funny, but the parks downtown don't seem to be littered with so much garbage.

When I worked in Corona, Queens for the city the constant refrain from Dominicans about garbage was "Look at the streets here, they are dirty...the streets in the Jewish neighborhoods don't look like this!"  They never seemed to make the jump to "maybe some people don't throw their trash in the streets."  The implication was, Everybody naturally litters...but the Jews make sure that the city cleans up their streets.

Obviously, Jerry Seinfeld just drops trash all over the sidewalk in front of his Upper West Side home. What else is possible?