Illegal aliens don't like raids. They don't like raids because they get arrested and deported. So, certain kritarchs have blocked some enforcement actions that will certainly be eventually upheld by the Supreme Court. Time for President Trump to pivot to the enforcement action that he can do, action that is legal, constitutional, and very effective.

Interestingly, reading beneath the headlines, the judge actually allowed the suspension of Department of Justice and Department of Homeland Security funds to be withheld from sanctuary cities.

However, the federal government is still able to enforce existing conditions of federal grants and does not restrict it from "developing regulations or preparing guidance on designating a jurisdiction as a 'sanctuary jurisdiction,'" Orrick ruled. 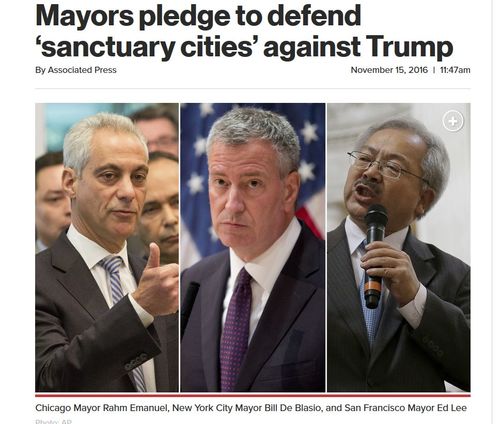 However, this is the time to show these sanctuary cities—and smug mayors like Rahm Emanuel—that the Federal government enforces immigration law. Time to begin a systematic campaign of immigration enforcement in cities like San Francisco and counties like Santa Clara County, the lead plaintiffs in this case.

President Trump should start doing things like this, but more openly and aggressively.

CHICAGO (CBS) — Undocumented immigrants are being warned to stay away from airports such as O’Hare, even if they aren’t traveling.

Nell Barker  [Email her] with the American Immigration Lawyers Association in Chicago, said these practices have gotten more attention recently.

And Barker says those officers have broad powers at airports, including investigating people who show up to pick up or drop off passengers.

Undocumented Immigrants Warned To Stay Away From Airports, by Jim Gudas, CBS 2, April 24, 2017

What can also happen is that President Trump can order U.S. Immigration and Customs Enforcement (ICE) to start similar actions, not at airports, but in the Democrat strongholds of Chicago, New York, San Jose, San Francisco, Seattle, and Dallas. 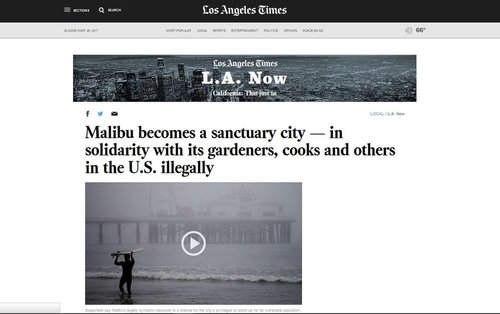 He can order that the raids that John Kelly and David Marin hate so much, commence with a vengeance, a vengeance directed at sanctuary cities and the illegal aliens that live and work there. He can even target Malibu, a city where illegal aliens only work, not live.

The President can order the Commissioner of the Social Security Administration to begin providing records that indicate unlawful employment to ICE, and the illicit employers of San Francisco who employ tens of thousands of illegal aliens in the expensive restaurants frequented by the Silicon Valley elite and the hipster workforce, as well as the other illegal alien employers in the landscaping, construction industries, retail, and hospitality.

This will be a sharp stick in the eye of the kritarchs and the Democrat politicians that support illegal aliens. And there is nothing they can do about it. Well, they could interfere with the ICE agents as they do their job, but that would bring about direct conflict, resulting in more arrests of Democrat voters and politicians, which would be a good thing.

President Trump has cards to play in this game, time for him to take action, as illegal immigration over the Mexican border is down, he can redeploy Border Patrol Agents to San Francisco, Santa Clara County, Chicago, New York, and Seattle.

Let's see how those sanctuary cities like it when a few thousand Border Patrol Agents show up in their cities and actually begin arresting illegal aliens who don't have criminal convictions yet. Border Patrol Agents can hit bus stations, and even the Bay Area Rapid Transit (BART) system, that openly supports illegal immigration and Muslim terrorism as well.[ San Francisco’s BART Rail System May Designate Itself a ‘Sanctuary in Transit’,KTLA, February 11, 2017]

Border Patrol Agents can cause massive panic among illegal aliens by showing up on BART and checking for illegal aliens. Panic and fear, those are the weapons President Trump can use against the kritarchs and sanctuary city politicians. Between the riots, demonstrations, and fleeing illegal aliens, those cities will collapse or be forced to get into line.

Likely this will provoke massive violence, but that will be a good thing, exposing Democrats and illegal aliens as violent terrorists, and in the end forcing big city police chiefs to crack down on Antifa and illegal aliens. This is real 4 dimensional chess.