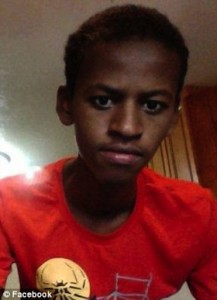 The story of the teen who amazingly survived five hours in an airplane wheelwell at 50 degrees below zero and with little oxygen continues to play out. The 15-year-old kid is a Somali, we learned after a few days, and apparently young Yahya Abdi (pictured) didn’t get along with his stepmother which is cited as the reason for his runaway behavior.

Either that or he wanted to see his real mother in east Africa so he stowed away on a plane headed for Hawaii. Details remain fuzzy, even after a week of drama.

It is curious that a boy attending high school would have such a deficient knowledge of geography. I recall being introduced to the globe and its continents in the fourth grade, but perhaps schools are more interested in diversity studies than geography these days.

It seems Yahya had only recently been informed that his mother was alive. She resides in an Ethiopian refugee camp and knew an opportunity when it came her way, saying that her boy wasn’t being properly cared for and she was just the one to handle it. The Daily Mail headline was clear: African mother of Hawaii plane stowaway vows to move to America to win custody of him.

Obviously she had heard of wealthy America even in east Africa. Now she wants some and sees her ticket. The refugee rescuers must be gearing up to welcome her. In addition, the jihad-friendly folks at the Council on American Islamic Relations are now on board — CAIR Represents Airplane Stowaway’s Family:

SAN JOSE — The birth mother of the 15-year-old boy who stowed away in a Hawaiian Airlines wheel well says she feels awful her son risked his life in a desperate attempt to find her and wants to see him again.

In her first interview with reporters since her son’s ordeal, Ubah Mohamed Abdullahi, 35, said from a refugee camp in Ethiopia that she blames the teen’s father and stepmother for treating him poorly and making him believe ?she died years ago in a rocket attack in Mogadishu.

“They killed me in my children’s minds,” Abdullahi told reporters in a call placed by one of the teen’s San Jose relatives. “If I could give a message to my son I would say I am still alive and I will come one day. Please stay calm and do not do anything stupid.”

On Friday, the boy’s father, Abdilahi Yusuf Abdi, told friends gathered at a Santa Clara mosque that he also wants to reunite with his son, Yahya, and bring him home. But he can’t afford to leave his job as a cab driver until Hawaiian authorities are ready to release his son.

For years, Abdullahi said, her ex-husband and his wife have refused to let her talk to her children, whom she is trying to join in the United States.

She also told the VOA in a radio interview, “I felt bad that he risked his life. I was told that he did this because of me.”

Abdi is hiring a lawyer to deal with the media, which remains camped out in front of his Santa Clara house as the family holes up inside. He also wants the lawyer to help address accusations from the mother and a relative that the teen was abused.

Yahya is the middle of three children born to Abdi’s first wife. Yahya’s father and stepmother have six younger children together.

“Now we’re dealing with so many things. That’s why they got the lawyer,” said Noor Mohamed, a family friend and fellow cab driver who was among a small group of Somali men who met Abdi after noon prayers on Friday at the Muslim Community Association Islamic Center, where the family worships.

Yahya remained in a Honolulu hospital Friday, where he still has difficulty breathing, Mohamed said the father told him.

The teen’s ordeal captured international attention after he was discovered on the tarmac at the Maui airport last Sunday.

Security cameras there caught images of Yahya’s feet dangling from the wheel well, then of the teen weaving from left to right, disoriented on the tarmac before asking a luggage handler for a bottle of water.

Aviation experts say Yahya may have gone into a “hibernation” state, which allowed him to survive the 5 1/2-hour flight in the wheel well at altitudes of up to 38,000 feet and temperatures that could have dipped as low as 85 degrees below zero.

Mineta-San Jose International Airport officials still have some explaining to do after the teen told Maui authorities he hopped the barbed-wire fence in the darkness and climbed into the wheel well of the nearest plane, which happened to be Hawaii-bound.

The breach, some of which was caught on video, has raised numerous security concerns, including that employees who are supposed to watch the security screens are also tasked with a number of other responsibilities.

Yahya, whose only personal possession at the Maui airport was a comb in his pocket, told Maui airport officials and the FBI that he ran away after an argument with his father and stepmother and walked the three miles to the San Jose airport. He also said he longed to see his birth mother in Africa.

Marvin Moniz, the Maui airport manager, told this newspaper he asked the teenager if he wanted to go home.

“He was disoriented. He kind of gave us a nod, but we also asked if he was tired,” Moniz said. “He said yes. We didn’t press anymore.”

In the telephone interview Wednesday from the refugee camp, the mother told reporters she wants the U.S. government to look after her son and her other two children with Abdi “until I come because I do not believe they are safe with their father and their stepmother.”

“She treats my children badly. She has her own children and she doesn’t care about mine,” Abdullahi said.

“I felt bad that he risked his life,” she told VOA. “I was told that he did this because of me.”

The mother, who hasn’t seen the children since 2006, said she had been trying to reconnect with them for years, but her ex-husband and his wife wouldn’t allow it.

A woman who answered the stepmother’s phone on Friday hung up without answering questions.

The interview with Abdullahi on Thursday with the Daily Mail was arranged by Mukhtar Guled, an insurance agent in San Jose who is the cousin of Yahya’s stepmother. He also spoke with this newspaper.

Guled acknowledged he has other grievances with the stepmother relating to the care of an elderly relative and hasn’t talked directly to the teen in months. But he said the Somali community in the South Bay is tight-knit and “you can’t hide anything.”