Back in 2010, Arizona took on the federal government by saying that states can enforce immigration law if they do so in accordance with pre-existing national laws. Arizona signed SB1070 into law, legislation written by Kris Kobach who took care to match the language up with federal statutes. Throughout the long media-whipped controversy, polls consistently showed that the public supported the Arizona approach. 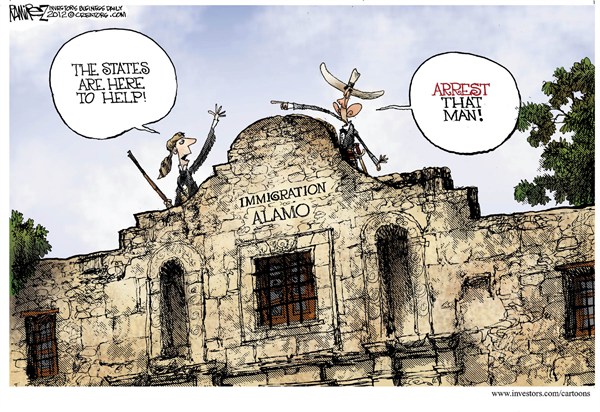 Now, four years later, the border is more open than ever with thousands of Central American kids being dumped on local communities and schools. The extreme position of liberal anti-sovereignty is truly breathtaking and is on view for all citizens to see.

As a result, polling continues to show that voters want immigration to be a legal process and they recognize the states as important players in the enforcement array.

Most voters rate the federal government’s handling of illegal immigration as poor and think states should be able to act on their own to stop the problem. They also favor use of the National Guard in their own state to deal with illegal immigrants.

Just 13% of Likely U.S. Voters now think the federal government is doing a good or excellent job dealing with the illegal immigration problem in this country. The latest Rasmussen Reports national telephone survey finds that 59% rate the government’s performance in this area as poor. (To see survey question wording, click here.)

Sixty percent (60%) believe a state should have the right to enforce current immigration laws if it believes the federal government is not enforcing them. Just 28% disagree, while 12% are undecided.

This is comparable to findings in December 2011 when Arizona announced its intention to go it alone because of the federal government’s failure to enforce immigration laws. But the Obama administration challenged the state’s effort in court, and the U.S. Supreme Court ultimately limited what Arizona could do.

Texas Governor Rick Perry also has been critical of the federal government’s handling of the current immigration crisis and has announced plans to send his state’s National Guard to the border to stop the flow of illegal immigrants. Sixty-one percent (61%) of voters nationwide favor using their state’s National Guard if necessary to deal with illegal immigration. Only 27% are opposed. Twelve percent (12%) are not sure.

By a narrower 49% to 38% margin, voters think the federal government should be required to reimburse states that feel compelled to use their National Guard to deal with illegal immigration. Thirteen percent (13%) are not sure.

Voters think President Obama is doing a poor job handling the latest immigration crisis and believe he wants most of these new illegal immigrants to stay here despite majority support for their quick deportation.

(Want a free daily e-mail update? If its in the news, its in our polls). Rasmussen Reports updates are also available on Twitter or Facebook.

The survey of 1,000 Likely Voters was conducted on August 4-5, 2014 by Rasmussen Reports. The margin of sampling error is +/- 3 percentage points with a 95% level of confidence. Field work for all Rasmussen Reports surveys is conducted by Pulse Opinion Research, LLC. See methodology.

Most voters don’t want any of the young illegal immigrants who’ve recently arrived here housed in their state and say any legislation passed by Congress to deal with the problem should focus on sending them home as soon as possible.

Most white (65%) and other minority voters (53%) think the government is doing a poor job dealing with illegal immigration, but only 29% of black voters agree.

Republicans and voters not affiliated with either major party are far more critical of the job the government is doing than Democrats are. But just 24% of voters in the president’s party give the government good or excellent marks for its handling of the illegal immigration problem.

Eighty-five percent (85%) of Republicans and 66% of unaffiliated voters think a state should have the right to enforce immigration laws if it does not believe the federal government is doing the job. Democrats by a 48% to 32% margin disagree.

Similarly, 89% of GOP voters and 65% of unaffiliateds favor the use of the National Guard in their own state if necessary to deal with illegal immigration. A plurality (47%) of Democrats is opposed. Democrats also are far more likely to oppose reimbursement to states that feel compelled to use their National Guard for this purpose.

Voters rate the latest immigration crisis as a bigger national security problem for this country than Russia and the renewed fighting between Israelis and Palestinians.

Most voters have long believed that the policies and practices of the federal government encourage, rather than discourage, people to enter the United States illegally.

A plurality (46%) thinks the Obama administration, through its statements and policies, has encouraged the latest wave of illegal immigration.

This distrust has hurt efforts to pass a comprehensive immigration reform plan in Congress. Most voters support a plan that includes a pathway to citizenship as long as the border is secured against future illegal immigration, but only 33% think it’s even somewhat likely that the federal government will actually secure the border, with seven percent (7%) who say it’s Very Likely.