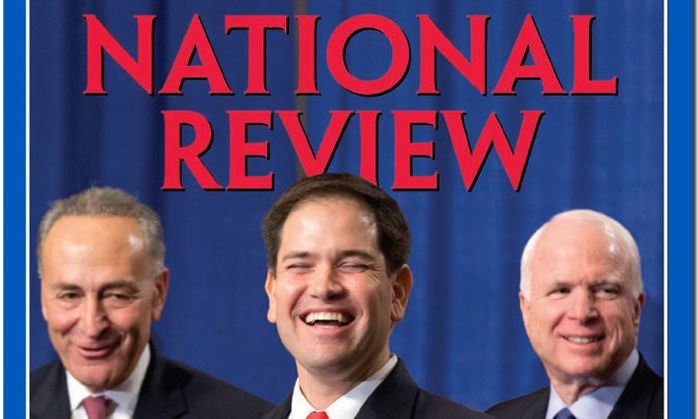 Center for Immigration Studies director Mark Krikorian has been allowed a cover story about the Gang of Eight deal in National Review.

It does have one helpful message, geared towards National Review's readership: if you were thinking of trusting Marco Rubio, don't.

"In the months leading up to the introduction of S.744, conservatives looked hopefully to Rubio as their representative on the Gang of Eight, someone who would make sure its plan didn't turn out to be a call for de facto open borders."

Now, says Krikorian, Rubio has turned out not to be the  "conservative ambassador to the Gang of Eight than the Gang's ambassador to conservatives". The reason I call that a message "geared towards National Review's readership" is that none of our readers ever trusted Rubio in the first place.

It’s not what the senator promised, but he’s defending it anyway.

When Mitt Romney lost last November, the Republican establishment decided that his moderately hawkish stance on immigration had been a major cause of his defeat. Never mind that his share of the Hispanic vote was within the margin of error of McCain’s 2008 share. Never mind the significant drop in white turnout. There is little elite constituency for a hawkish approach to immigration, and much elite support for lax enforcement and increased legal immigration (Romney actually supported the latter).

So the Republican establishment turns its hopeful eyes, once again, to so-called comprehensive immigration reform. The same senators who pushed such a bill in 2007, prominently including Republicans John McCain and Lindsey Graham and Democrat Chuck Schumer, are at it again. They have devised a plan that would ease the path to legality for illegal immigrants while making some gestures toward enforcement. But a new element this time around is Marco Rubio.

A tea-party favorite (and a favorite of this magazine) who wrested the senatorial nomination from GOP-establishment pick (now Democrat) Charlie Crist, he’s young, telegenic, and the son of Cuban immigrants. Rubio became part of the “Gang of Eight,” four Democrats and four Republicans negotiating a deal that sought to placate a dizzying array of interests, all seeking de facto unlimited immigration but each with a different set of specific concerns. [More, but if you're not a subscriber, NR wants 25 cents of your money.]