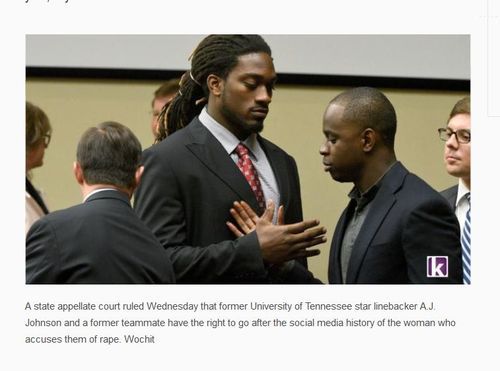 [Previously: With New Charges, the Knoxville Horror Is A Live Case Again—Possibly with More Indictments to Come!]

Might a future Lemaricus Davidson, Letalvis Cobbins, Eric Boyd or George Thomas, of Knoxville Horror notoriety, get a heads-up from the Knoxville Police Department that the law is coming, so that he can take precautions—destroying evidence, getting his lies straight, etc.—such as to beat the rap?

The future is now.

Racial police corruption in Knoxville (aided and abetted by the media) played a role in the Knoxville Horror, and it turns out the rot went much deeper.

Lemaricus Davidson and his crime partners were on a months-long crime spree (home invasions, robberies, etc.) but the Knoxville Police Department made little or no effort to catch them until they committed the Knoxville Horror, carjacking, kidnapping, gang-raping, torturing and murdering Channon Christian and Christopher Newsom.

Immediately after its officers found Christopher Newsom and Channon Christian’s bodies, the KPD fed information on the KH to local reporters, while Department public information officer, Sgt. Darren deBusk, stonewalled yours truly. In exchange, the reporters made scurrilous charges against a U.S. Deputy Marshal from Kentucky, blaming him for saying that the rapes and torture lasted longer than they actually did, when local police also had no idea how long the atrocity had lasted, and falsely insinuated that the killers had chopped up Christian. (Full disclosure: The federal lawman in question was one of my (on the record) sources. Defend thy sources!)

During a break at George Thomas’ 2013 retrial, while I was interviewing a member of the KPD, I wondered aloud if it would have helped me to camp out outside KPD headquarters in 2007. My interviewee’s pithy response: “Nope.”

Knox News Sentinel reporter Jamie Satterfield, the only journalist who has written more on this case than I have, and who was wearing out the courthouse rug, eavesdropping on our conversation by diagonally marching back and forth a few feet away, tossed over her shoulder, “We didn’t have that problem.”

The KNS, under liberal Editor Jack McElroy, the KPD under Chief Sterling Owen IV, and John Gill, spokesman for District Attorney General Randy Nichols, all vociferously denied that the atrocity was racially motivated.

Lying about race—denying obvious black racism, while inventing white racism—is one of the faces of the banality of evil in our time.

Because unlike Knoxville-area media I owe the KPD no favors—it’s all about friends and enemies—I’m free to report the truth about what has been going on.

PC, former FBI agent Chief Sterling Owen IV so racially whipped his personnel at the KPD, that a detective left out of his report a racist statement killer George Thomas had made to KPD detectives in Lebanon, Kentucky, just after ending a January 11, 2007 interrogation.

“F--k that white girl, she don’t mean nothing to me, you cops come into my neighborhood and kill us why should I get involved in something that’s none of my business.”

“No telling what he would have said had race been a factor.”

When Detective Nevil Norman wrote a memorandum (PDF) to deputy prosecutor Leland Price on June 24, 2008 quoting Thomas’ statement, naturally Thomas’ defense counsel claimed that the detective had invented the statement after the fact.

More recently, the public learned that under Owen’s successor, David Rausch (who recently left to become the head of the Tennessee Bureau of Investigation—in politicized law enforcement, the scum always rises to the top), that an utterly corrupt relationship was institutionalized between the KPD and the University of Tennessee Athletic Department. Whenever UT athletes (all of whom were black), were determined by the KPD to be suspects in felonies, e.g., rapes, Chief Rausch would call, say, UT head football coach Butch Jones, in advance of sending officers to the suspect’s home. The coach would then immediately call the suspect, in order to give him a chance to destroy evidence, get his lies straight, etc. The euphemism used by those involved was “courtesy notifications,” or “courtesy calls,” but the legal term for this misconduct is “conspiracy to obstruct justice.”

(By the way, no UT feminists protested the alleged rape.)

'UT is bigger than this case'

[KPD investigator Tim] Riddle's testimony [in the Johnson-Williams rape case] made clear he is still angry over the UT athletics department’s inclusion in the case, and his own chief's approval of it.

“It let me know UT is bigger than this case,” he said.

Former News Sentinel reporter Don Jacobs revealed in April 2016 that KPD chiefs and the UT athletics department had an unwritten agreement of “courtesy notifications” whenever a UT athlete was suspected in a crime.

In a statement attributed to Rausch but sent to Jacobs via [Knoxville Mayor Madeline] Rogero’s office, Rausch acknowledged the “longstanding practice,” and said he and Rogero conducted a review of whether the “courtesy notifications” had impacted any criminal investigations by the department.

“It is clear,” Rausch said in the statement, “that no investigations were compromised or improper information provided.”

But he said he was going to end the practice. The DA’s office applauded the decision. Prosecutors had openly criticized the practice in an interview with Jacobs.

Rogero spokesman Eric Vreeland said Thursday there were no records of the review Rausch said he and Rogero conducted.

Riddle testified Thursday no one from KPD or the mayor’s office ever asked him if his investigation of Johnson and Williams had been “compromised.” He said he knows of no other investigator or officer who was contacted as part of that “review.”

Prosecutor Kyle Hixson asked Riddle a series of questions to show the investigation was compromised — beginning with the notification to Johnson that he was a rape suspect.

“You don’t want the suspect to know you’re coming … Lord, no, never,” Riddle said. “They might destroy evidence.”

Riddle told jurors he believes that’s exactly what Johnson did. By the time Riddle and fellow investigators had enough evidence to get a search warrant — 18 hours after the alleged rape was reported — they walked into his apartment to find that the floor had been mopped and trash bagged up. Sheets were piled on the bottom of the landing along with a piece of carpet.

But four condom wrappers and one spent condom remained in a trash can in Johnson’s bathroom. There has been no testimony about forensic testing of those items, which police seized. ['It let me know UT was bigger than this case,' investigator says of A.J. Johnson case by Jamie Satterfield, Matt Lakin, and Travis Dorman, Knoxville News Sentinel, July 27, 2018.]

KPD investigator Tim Riddle testified that UT assistant athletic director Mike Ward interfered with the investigation, insisting on being present for all interviews with the UT rape suspects.

By contrast, note that in 2006 when black prostitute and career criminal Crystal Gail Mangum falsely accused three white Duke University lacrosse players were falsely accused of rape in 2006 by, university president Richard Brodhead and other university officials, and Durham police officials did everything in their substantial powers to violate the victims’ rights.

In a related case, black former UT football player Geraldo Orta, was hired by the KPD as a police officer while under suspicion of witness tampering, for allegedly threatening and twice beating witness Drae Bowles, a UT wide receiver, in the alleged rape by star UT linebacker A.J. Johnson and cornerback Michael Williams.

The alleged rape had been committed in Johnson’s bedroom during a party he threw at his apartment in November 16, 2015. Bowles drove the alleged victim home, and helped her to call police, to report that she’d been raped.

Bowles' teammates, including Orta, rewarded him by beating him up twice, Bowles claimed in a lawsuit. He repeated that claim on the witness stand Tuesday.

Orta wasn't charged with assaulting Bowles, who never filed a police report. But Orta told police investigating the rape case "he felt Bowles had betrayed the team," and where he came from, "people got shot for doing what Bowles did."

When police questioned Johnson, he told investigators Orta and the team had put out "a hit" on Bowles. Orta denied that.

"I’ve never put a hit on someone in my life!” he told The Tennessean two years later. “And that is a fact. People will lie just to save themselves." [Vol accused of threatening witness in A.J. Johnson rape case is now KPD officer by Matt Lakin, Knoxville News Sentinel, July 27, 2018.]

At least, local media have finally done some reporting on the KPD’s (and UT’s) racial corruption, though they have not identified it as such.

UT head football coach Butch Jones’ phone records showed that he called Drae Bowles several times during the day on which the KPD had notified him of the rape charge. How did Jones know about Bowles’ involvement, and what possible justification could there have been for his repeatedly calling a witness in a felony case?

On Friday, July 27, 2018, A.J. Johnson, who had gotten a heads-up call from his Coach Jones, after Jones had gotten a heads-up call from KPD Chief David Rausch, was acquitted, along with fellow defendant, Michael Williams, of rape. [Jurors: Former star UT linebacker A.J. Johnson and ex-teammate not guilty of rape by Jamie Satterfield, Knoxville News Sentinel July 27, 2018.]

If we were a nation of laws, that acquittal would not stand, and Chief Rausch, Coach Jones, Johnson, Williams, et al., would all be charged with conspiracy to obstruct justice.

In 2016, Chief Rausch announced that the KPD would no longer conspire with the UT Athletic Department to obstruct justice, though not in those exact words.

Newly-installed Chief Eve Thomas has not addressed the matter of the continued employment by the KPD of Geraldo Orta.

I suppose the KPD could argue that since its conspiracy to obstruct justice was successful in getting Johnson and Williams off, the rape was thereby undone, thus also undoing the crime of witness intimidation.

Back in the dark, old days before “affirmative action,” better known as “diversity,” to a professionally-run police department, a Geraldo Orta would be radioactive. It wasn’t enough for a candidate to not be a convicted criminal; he had to be above reproach. People with red flags before even being hired notoriously make for bad cops, and you can’t risk having them on a force.

If one is going to eliminate all standards, why continue stealing taxpayer money to maintain police departments? Answer: Black men still need jobs. We don’t want them out there committing crimes!