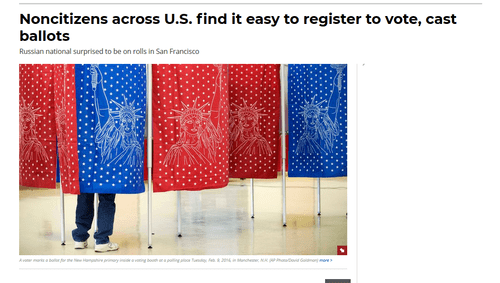 WASHINGTON TIMES: "Noncitizens Find It Easy To Register And Vote"

In a rally in Tampa, Florida, on July 31st, President Trump declared that “We believe that only American citizens should vote in American elections, which is why the time has come for voter ID.”

Amen to that, President Trump. Why not adopt a Mexican-style voter registration system? (See here.)

The Washington Times ran an interesting article entitled Noncitizens across U.S. find it easy to register to vote, cast ballots [by S.A. Miller, Washington Times, July 31, 2018) which is not surprising given our slipshod voter registration practices.

A Russian national or any other noncitizen can easily influence a U.S. election by simply registering to vote in California — just ask Elizaveta Shuvalova. Ms. Shuvalova said she didn’t even know her name was added to the San Francisco voter rolls in 2012, when she was a 21-year-old Russian citizen living legally in the U.S. but ineligible to vote. “I’ve never registered for anything in my entire life,” said Ms. Shuvalova, who became a U.S. citizen early last year. “This is news to me.”

I guess this is not the sort of Russian influence that Bob Mueller is investigating.

We’re often assured that there is not voter fraud problem in the U.S., and we don’t need to change our registration system. But the Washington Times actually did some independent investigating. Imagine that.

The Washington Times obtained a San Francisco County voter log that detailed Ms. Shuvalova’s registration history and presented the document to her. It showed that she signed up as a Democrat in July 2012 and that her registration was canceled in May 2016 after she told election officials she wasn’t a citizen. Her registration, as a Republican, was reactivated in March 2017. “This is definitely a shocker to me. It is like an identity fraud because this is not coming from my end,” said Ms. Shuvalova, who now lives in New York, works as a personal trainer and calls herself a Democrat. “Like I told you, I haven’t even been a citizen during that time frame. So what can we do about it?”

How about secure photo voter ID.

More of a shocker is how easily Ms. Shuvalova was registered to vote in California without a citizenship check. Conservative watchdogs say the problem is surprisingly common across the country. Noncitizens are signing up to vote in states including Pennsylvania, New Jersey and Virginia, according to research by the Public Interest Legal Foundation, a nonprofit law firm that advocates for election integrity. The foundation found that a large percentage of those noncitizens managed to cast ballots, too.

But the Democrats keep telling us this is not a problem.

Ms. Shuvalova was signed up — possibly without her knowledge — by an organization circulating a petition for a 2013 ballot initiative to stop a massive condominium development on the San Francisco waterfront. A signed registration card was submitted with the petition to qualify Ms. Shuvalova as a petition signer, said John Arntz, director of the San Francisco Department of Elections. Activists often hand in stacks of registration cards with their petitions, he said. Election officials say they conduct routine cross-references of voter registration information with databases at the state’s Department of Motor Vehicles and the secretary of state’s office but did not flag Ms. Shuvalova as a noncitizen.

So how thorough was that “routine cross-reference”?

The box for “vote by mail” was checked on her registration card, and the county began sending her ballots. County records show she received nine ballots but never voted. The only ballot returned to the election office was in May 2016, a month before the state’s Democratic primary, with the words “not citizen” written on it. Her self-identification as a noncitizen was noted on the voter log. The county canceled Ms. Shuvalova’s registration at that time.

If, on the other hand, she had wanted to vote illegally, what would have stopped her?

Yet she was somehow reregistered again a year later, about the time she became a citizen. Four months later, she moved to New York but remained on the California voter rolls. Ms. Shuvalova said she doesn’t recall registering to vote either time or returning the ballot saying she wasn’t a citizen. Mr. Arntz said nothing would have prevented Ms. Shuvalova from voting prior to 2016 and she would have remained on the voter rolls if his department had not received the ballot with “not citizen” scrawled across it.

Exactly, “nothing would have prevented” her voting.

But he [Mr. Arntz] didn’t think the Shuvalova case represented a broader problem. “If it was a problem, this would be an issue that comes up every election or something we would have experienced more through time. But it doesn’t,” he told The Times. “This is the first instance that I’ve actually had a conversation like this,” he said. “So, no, I don’t think it is a problem. I don’t think there’s many records out there like this.”

After all, he hasn’t seen it, and apparently hasn’t even been on the lookout for it, so the problem doesn’t exist according to Artz. Case closed.

The Public Interest Legal Foundation said it already has other examples from Mr. Artz. Logan Churchwell, communications and research director for the foundation, said Ms. Shuvalova’s file was one of more than two dozen records gleaned from San Francisco, based on a request for other self-reported noncitizens. In six of those cases, the noncitizen also had a voting history. “Our voter registration system masks noncitizens and allows the opportunity to vote until they decide to self-report at their own peril. All of this could have been prevented if states actually verified citizen eligibility upfront,” Mr. Churchwell said.

Notice – “Our voter registration system masks noncitizens and allows they opportunity to vote until they decide to self-report”, that is, if they self-report.

In response to the inquiries by The Times, Mr. Arntz said the Shuvalova case would be forwarded to San Francisco District Attorney George Gascon for review. “This voter did not recall completing a registration affidavit in 2012. So then the question would go potentially to whoever organized the petition circulation,” he said. Mr. Arntz said he was almost certain that nobody had been prosecuted in San Francisco for being a noncitizen on the voter rolls during his 16 years at the department. “I can’t remember forwarding an allegation that someone was a noncitizen who registered to vote or did vote,” he said.

I guess if you don’t want to watch out for this problem, it’s likely you won’t find it.

Keep pounding the drum on this issue, President Trump!