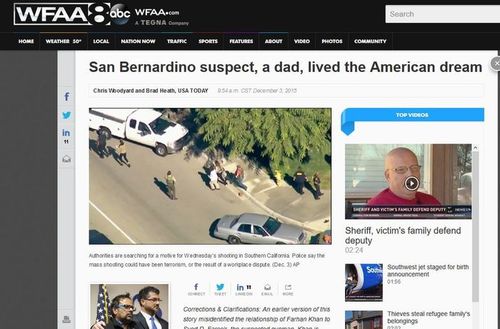 Authorities are searching for a motive for Wednesday's shooting in Southern California. Police say the mass shooting could have been terrorism, or the result of a workplace dispute. (Dec. 3) AP

Have you noticed how immigrants and/or Hispanics have become inseparable in the media mind from the cant phrase “the American dream,” even when the implications are disastrous for the beloved Gang de Ocho? Last month, for example, the New York Times headlined its profile of Tamerlan Tsarnaev with “Before Bombs, a Battered American Dream.”
And today, a headline in the current Washington Post:

Q. What are they thinking?

A. I don't think they are thinking. They can't help themselves. The whole American Dream / Give Me Your Tired, Your Poor / Nation of Immigrants / Statue of Liberty thing has just become a Pavlovian reflex.

The NYT changed the headline on its web version but "Before Bombs, a Battered American Dream" is immortalized in the print version. I've saved a screenshot, above, in case WFAA comes to its senses.