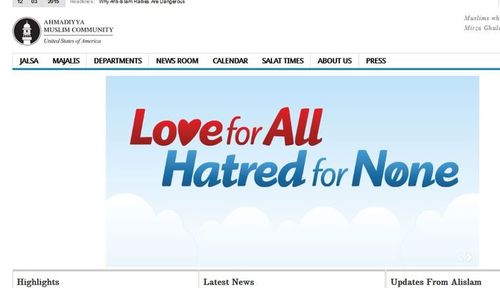 In the wake of the San Bernardino shooting, the NYT prints this in its ongoing coverage:

Ahmadi Muslims belong to a sect that has been denounced and persecuted by extremists for adhering to an interpretation of Islam propounded more than a century ago by the sect’s messianic founder. A New York Times article gave an overview of the community during one 2010 campaign to present Islam as a religion that abhors violence.

On Thursday, the group issued a statement from a leader of the community about the San Bernardino shooting.

“This senseless loss of life is tragic,” said Nasim Rehmatullah, the senior vice president of Ahmadiyya Muslim Community USA. “We extend our condolences to the victims and their families. The Quran teaches us the killing of an innocent is like the destruction of mankind. Humanity was destroyed far too many times today.”

Look, the NYT says right here that the Ahmadiyyas (founded 1889) are minor, persecuted sect among Muslims, and looking it up, I find that Wikipedia says that  they are "officially estimated to number between 10 and 20 million worldwide".

That's out of a worldwide Muslim population estimated to be 1.6 BILLION. The Ahmadyya.us web page features a banner that says "Love for all/Hatred for None." That is not mainstream Islam. It just isn't. Why is the NYT quoting them? Because the NYT wants to believe.

If they're looking for a dissident, persecuted, Middle Eastern community with "messianic founder" to condemn Muslim terrorism, why don't they ask a Christian?