Kenya's President Imposes An Ebola Travel Ban, As Do 26 Other African Presidents—But Not Obama 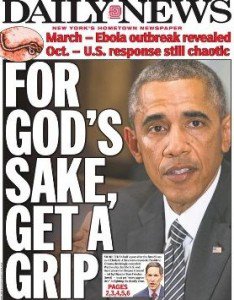 The US, by contrast, doesn't have a travel ban, because its Kenyan-American President won't impose one.

Ebola Travel Bans Enacted by Nearly 30 Countries, but Not US

Though the Obama administration has insisted travel bans are not necessary, even countries outside of Africa are beginning to start such travel bans, with Colombia and the Caribbean island of St. Lucia on Wednesday adding their names to a growing list of nearly 30 countries that block travelers from virus-stricken Liberia, Sierra Leone, and Guinea.

African nations including Kenya, Zambia, and South Africa make up the bulk of the countries that have instituted some kind of ban, and now that countries on the other side of the Atlantic have begun imposing restrictions, calls for the U.S. to follow suit have intensified.[More]

Even John Boehner is calling for a travel ban from Ebola stricken Africa, though he's never done anything to oppose the surge of frequently disease carrying immigrants across America's southern border. But Obama, who could legitimately take executive action here, does nothing.