Washington liberal elites love the fable that welcoming foreign students into US universities spreads American values on the cheap. The State Department in particular promotes student visas that directly harm US young people by displacing them from jobs (J-1 visa) to college slots.

The universities depend on foreign students writing checks for full tuition. And of course the liberal institutions preach diversity as the highest good, as shown by foreigners taking the place of US students.

But the idea that an American college education makes its recipients friendlier to this country is belied by an explanatory photo of Iran’s cabinet — “Iran has the highest US university alums in any foreign cabinet in the world”: 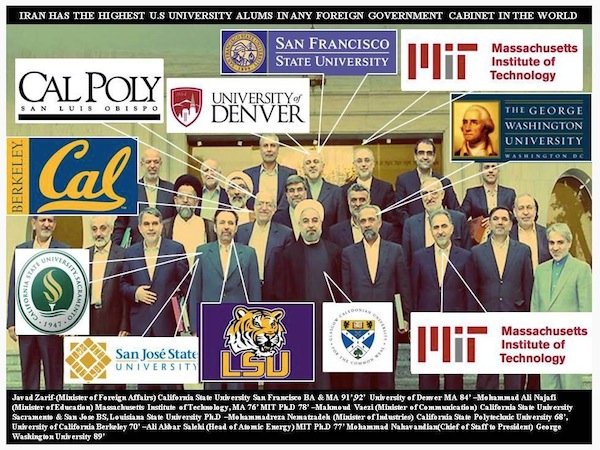 One notices the popularity of California campuses: San Jose State, Sacramento State, San Francisco State, Cal Poly and UC Berkeley. Obviously the young Iranians were not convinced by the free and easy lifestyle that personal freedom is superior to Islam’s famous oppression.

More concerning is the PhD in nuclear engineering from MIT held by the head of Iran’s Atomic Energy Organization, Ali Akbar Selehi.

A few weeks after 9/11, Sixty Minutes reported in Educating the Enemy that “One of the bitter ironies of Sept. 11 is that the hijackers who committed mass murder relied on skills they learned in America.”

Now the young students of yesterday have become the leaders of today’s hostile Iran.