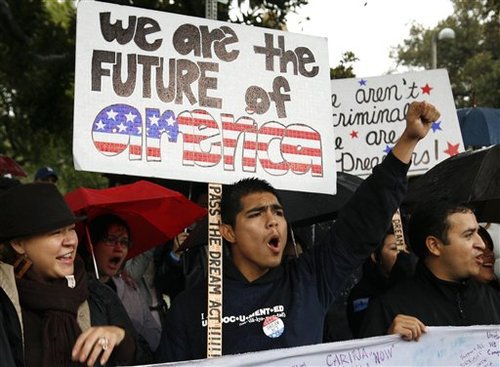 In a DAILY CALLER post called Cantor’s Mistake, amnesty opponent Mickey Kaus points out the failure of Eric Cantor's straddle, where he's trying to turn DREAMERs into KIDs, and maintain that he's not really for illegal immigration if it's not KIDs.[See may Cantor’s KIDS Act—The “D” Stands For “Donor”] (As for the recent surge of unaccompanied minors, Kaus says, as he's entitled to "You could have predicted this. I did predict this.")

“Muchas Gracias, Senor Cantor!” ** Famous ambitious positioner Eric Cantor probably thought he’d hit a Solomonic sweet spot last year when he dramatically announced his support of immigration amnesty for “ the kids …  those who were brought to this country as children.” The MSM would predictably love it — compassion from a Republican leader! Yet conservatives might not hate him — after all, he wasn’t endorsing a general amnesty of all 11 million undocumented immigrants.*** And who doesn’t like “kids”?

Little did Cantor know that this exquisitely calibrated stand would prove to be about the most embarrassing position he could take  — when the “kids,” often unaccompanied, started surging across the southern border, causing a humanitarian and policy crisis just as he was facing a challenge in Tuesday’s Virginia primary. Even the New York Timescouldn’t help but notice that the young illegal migrants said they were motivated, not just by conditions back home in Central America, but also by the prospect that they’d qualify for Cantoresque amnesty. ”Central Americans, [said a Salvadoran immigration official] were left with the sense that the United States had ‘opened its doors’ to women and children.”

“If you make it, they take you to a shelter and take care of you and let you have permission to stay, ” Robin [a 13-year old] said after he stepped off a bus on a Thursday night with eight others caught on their way north.

President Obama — by reducing deportations and granting “kids” de facto legal permission through executive action — is mostly responsible for the more permissive atmosphere, of course. But isn’t that what Cantor wanted too? Potential immigrants pay attention to what Republicans as well as Democrats say — if you read the Spanish language press, you know the subject of immigration is covered there in depth and detail. (“That is what they are saying on the news, that if you travel as a woman with a child, there is an opportunity to get in” — Paulina, 29, to Arizona Republic.) And maybe Obama acted, in part, because he knew Cantor couldn’t really object.

The border surge dramatically undercuts the rationale for the Cantor “kids” exception in at least four ways.

Go to Kaus's post to see what they are.

I'll just say that the proposed exception for DREAMERs or KIDs