Juneteenth is now a Federal Holiday—the first new holiday added to the calendar by our elected officials since MLK Jr.  Day in 1983. What exactly is Juneteenth and why is this yet another Blood Libel against White America? Read Washington Watcher II to understand why this is the true anti-white holiday. 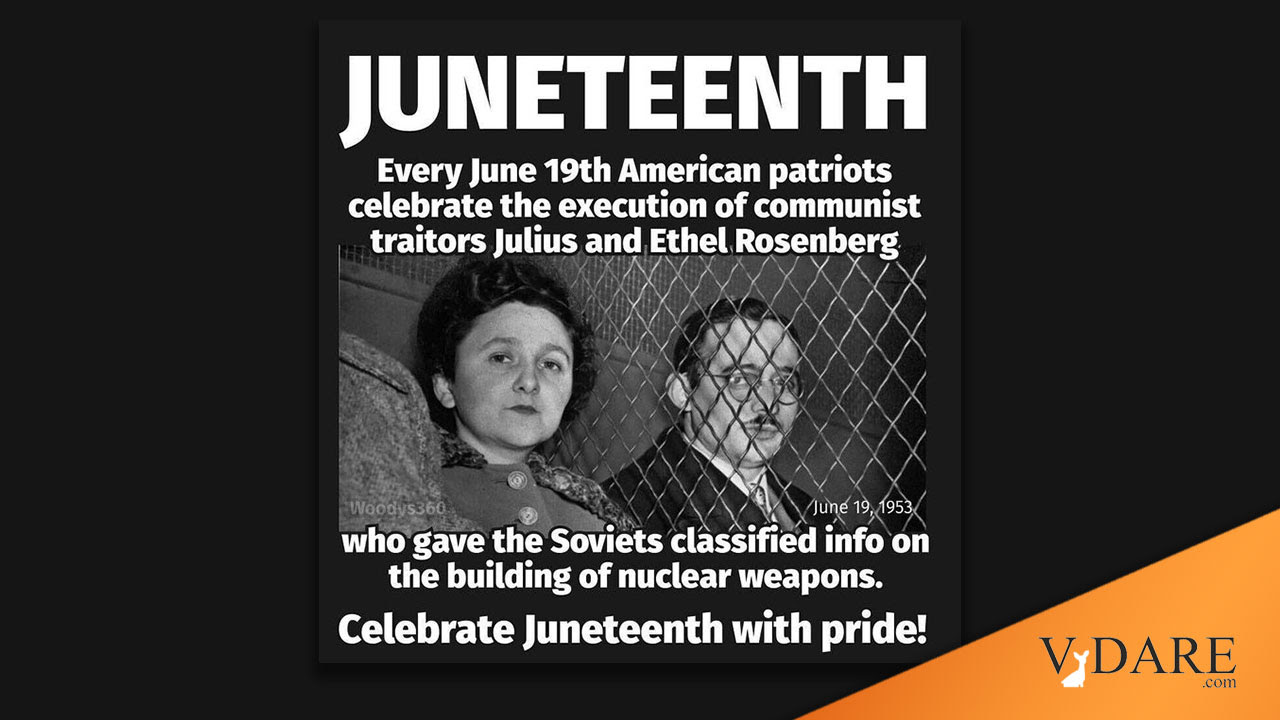 Meanwhile, those of us at VDARE HQ at the Berkeley Springs Castle in West Virginia will be celebrating West Virginia Day this weekend, because our true Independence Day is something we only enjoy on July 4th!

From Washington Watcher II: "Donald J. Trump is also guilty. He made passing it a central part of his silly Black Platinum Plan, and actually brags he popularized it. Of course It didn’t help win any black votes.

Cornyn, James, and other Republicans claim Juneteenth reaffirms American patriotism, even though it dwells entirely on America’s much-touted original sin. That’s delusional. It’s more about reminding America about the misery of slavery—and that white caused it—than the glory of emancipation.

But the Left gets it. They say the purpose of the holiday is to educate everyone on “systemic racism.”

From Paul Kersey: "A statue of George Floyd, a career black criminal who died of a fentanyl overdose while resisting arrest, seems a fitting reminder we live in Black-Run America (BRA). For reference, this is the man the black politically dominated city of Newark is honoring:

Between 1997 and 2005, Floyd was arrested several times on drug and theft charges, spending months in jail. Around that time, Wayne’s mother, Sheila Masters, recalled running into Floyd in the street and learning he was homeless.

In August 2007, Floyd was arrested and charged with aggravated robbery with a deadly weapon. Investigators said he and five other men barged into a woman’s apartment, and Floyd pushed a pistol into her abdomen before searching for items to steal. Floyd pleaded guilty in 2009 and was sentenced to five years in prison. By the time he was paroled, in January 2013, he was nearing 40."

Also from VDARE.com on the Juneteenth Madness: