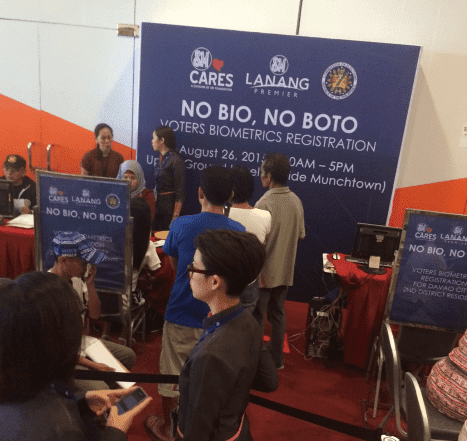 Voter Registration in the Philippines: "No Bio, No Boto"

In the U.S. it’s considered a racist conspiracy to ask would-be voters to show some photo ID to prove they’re not, say, my late father (whose name I haven’t succeeded in getting taken off the voter rolls in the three years since he died at age 95). But in the Philippines, the watchword is “No Bio, No Boto:” if you don’t register some biometric ID you can’t vote. A friend took this picture today in Davao, where hundreds of Filipinos were lined up to get biometrically recorded so they can vote in 2016.

‘No Bio, No Boto’: Voters reminded to have biometrics

MANILA – Registered voters are again reminded to have their biometrics taken, as the period of validation (up until October 31, 2015) is coming down to its last two months.

The Mandatory Biometrics Registration Act (Republic Act No. 10367), signed into law in 2013, requires registered voters to have their biometrics captured, or otherwise be deactivated.

Data from the Commission on Elections (Comelec) show that over 4 million registered voters have not undergone biometrics yet, as of June 2015.

If the Biometrics part says “not available,” then it’s time for you to have your biometrics in the nearest available area. …

The Comelec’s satellite registration centers in malls are open every weekend. Click here for the full schedule for this month.

The law says biometrics refers to information that positively identify a person through his or her voice, photograph, fingerprint, signature, iris and/or such other identifiable features.

The Comelec stresses that the “No Bio, No Boto” rule is one of their steps to ensure a clean and honest election in 2016 and the coming years.

Third World countries seem, in general, to have better voting systems than America, which hasn’t done much to upgrade since, roughly, Boss Tweed’s downfall and the introduction of the Australian ballot.

By the way, how long until sophisticated sentiment turns against the Australian (i.e., secret) ballot? Anybody who shows up to vote should of course be allowed to vote without a single request for identification, but who they vote for, well, that’s a whole different matter … Shouldn’t the NSA be checking up on whether Americans are pulling the curtain on the voting booth and then abusing that privacy by voting for some inappropriate candidate? Would Donald Trump even be a contender if voting had to be done in the appropriate modern American way: by sharing selfies with the world on Facebook and Twitter of yourself casting your vote for the Clinton or Bush of your choice?

(In case you are wondering what “Munchtown” is, it’s a diner in Davao.)