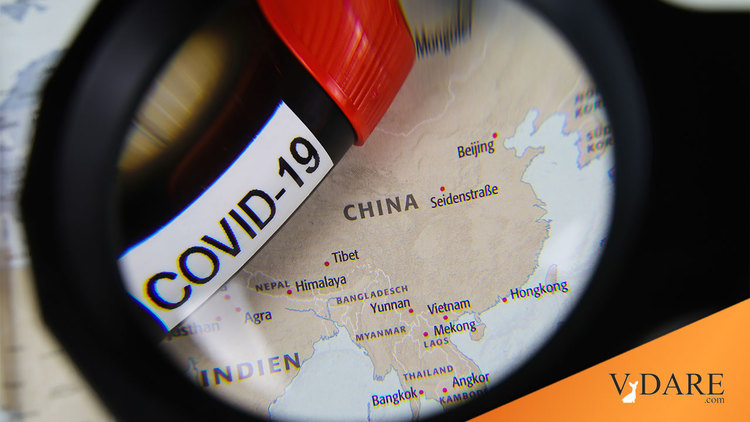 Earlier, by John Derbyshire: Where Did The Covid Come From? Inquiring Minds Want To Know!

A follow-up to comments I made in my podcast two weeks ago. The topic is covid, the origin of.

There are, I said, three possibilities in play:

That third possibility, first aired by the ChiComs early on in the pandemic, and argued in detail by Ron Unz in March this year, seems not to have gotten much traction; so while I wouldn't discount it altogether, I'll lay it aside and focus on the other two.

I praised Nicholas Wade's long May 5th article at the Bulletin of the Atomic Scientists for its careful sifting and weighing of the available evidence, and its good argumentative comment thread. That sifting, that weighing, that arguing, I said, is science at its best. Wade showed that the lab-leak theory was stronger than the Wet Market one.

I stand by all that; but the quest for the origins of Covid has made it clear how little purchase Wade's scrupulously scientific approach has on humanity at large. Most of the positions taken have been taken for political, not scientific reasons.

We started out a year ago with a quite solid consensus in favor of the Wet Market theory. Why? Partly because, on the scanty evidence we had, Wet Market seemed more probable to the scientists; but also because then-President Trump hinted that he favored the lab-leak theory. If Trump was for that theory, all right-thinking people had to be against it.

Our politics had collapsed into a simplistic Trump/not-Trump dichotomy, Hutus and Tutsis; whatever Trump was for, the ruling class was against. The media, the social media, the academy, they all threw themselves behind the Wet Market theory. Sure, the scientists were favoring it too; but the evidence was so circumstantial, the lab-leak theory couldn't be discarded on scientific grounds.

Scientific grounds be damned! Why, if Trump was for the lab-leak theory, then it was racist, wasn't it? Facebook actually censored posts arguing the lab-leak hypothesis. If you believed it was possible, you were a Hutu—one of the Dirt People, a Deplorable, a white supremacist.

The ChiComs meanwhile were also pushing the Wet Market theory. It didn't make them look particularly good. A lot of people in the West thought it kind of disgusting that Chinese people purchased live animals of exotic species and took them home to kill, cook, and eat.

The lab-leak theory, though, made the ChiComs look really bad. What: their science labs, of which they are immensely proud, are so poorly supervised they let lethal diseases loose on the world? The ChiComs didn't want that to get any currency.

Some of their outlets promoted the American biowarfare theory. (This was last year, way before Ron Unz got to it.) Others, going with the less damaging to Chinese national pride of the two alternative theories, conceded that the Wet Markets might have had something to do with it. Lab leaks? Certainly not!

That only fortified the disposition on the part of our ruling class to favor the Wet Market theory. There are business opportunities, academic opportunities, travel opportunities, and simple cold cash to be gained by kissing up to the ChiComs. Our Tutsis are by no means averse.

The more that experts looked at the issue, though, and the more bits and pieces of evidence came out, the more plausible the lab-leak hypothesis became. Public-health officials, including at last Anthony Fauci his esteemed self, were murmuring that further investigation was justified. Nicholas Wade's article put the murmuring into the public arena. Quite suddenly, the lab-leak theory was respectable.

It didn't hurt that Nicholas Wade had included details of our own government's involvement in funding research at the Wuhan labs, a thing that wasn't widely known before.

So while the lab-leak hypothesis was still anti-Chinese, and therefore racist, it now had a slight color of anti-Americanism, too. Covid was our fault!

That little frisson of anti-Americanism likely helped make the lab-leak theory acceptable to our Tutsi ruling class. Anti-Americanism, they can relate to. We are guilty! We are all guilty!

My own take on the present situation, with the evidence still mostly circumstantial, I'll state as percentage probabilities.