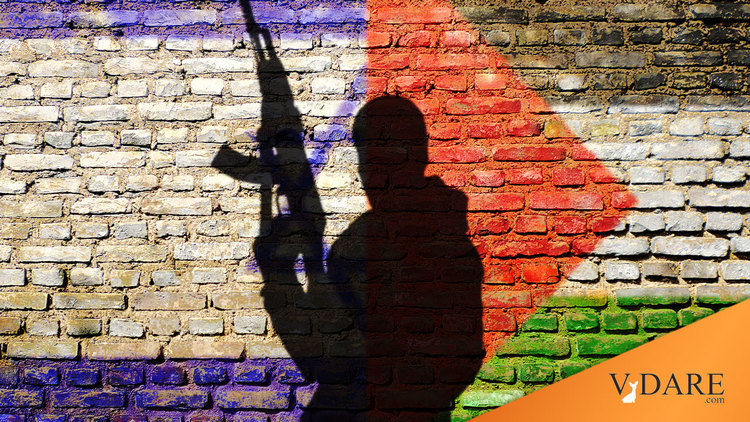 Policing Diversity Hell In Israel—Not THAT Different From U.S. Problems

A follow-up to what I  said two weeks ago about Diversity Hell in Israel.

On the subject of policing, I had an interesting email from a listener following what I said about violence between Arabs and Jews in Israel, and the parallels with racial violence in the U.S.A.

I'll just read the email off to you, lightly edited. This is from a listener well acquainted with Israeli society. Quote:

There is a similarity between policing Muslims in Israel and policing blacks in the U.S. If policing is hands-off, they complain that the authorities are doing nothing about crime in their communities, but if it is too strict they complain about that.

In addition, Muslim society is based on clans and extended families. A Jewish policeman has obvious difficulties; but an Arab policeman will also have a hard time policing a town to which he has blood ties, because his group will expect him to be lenient with them, and another group will be sure he is against them.

There are often feuds between groups, and when such a feud leads to injuries, the victims from one side must be sent to hospital A, and the victims of the other side to hospital B, or else additional mayhem will break out between the visitors to the hospital.

Gun control is very strict in Israel, such that few Jews can get licenses, though Jewish crime gangs have illegal guns, which they use to settle scores in that world.

The Arab sector is awash in illegal weapons—a situation that I think is related to the authorities' trying not to stir them up by searches and confiscations. These they use in feuds, and I fear would use them in another intifada.

The Bedouin of the Negev desert build illegally, marry bigamously illegally, and have illegal arms, but again the authorities tread lightly.

So, as I said two weeks ago: Diversity Hell.

Again I go back to what I said two weeks ago: There is no civilized way out of this, either for us or for the Israelis. When your nation's particular diversity turns into Diversity Hell, you just have to cope as best you can. It's like one of those diseases that can't be cured, only managed.

It's too bad the managing involves destroying the lives of people like Derek Chauvin, who probably thought he was just doing his job.