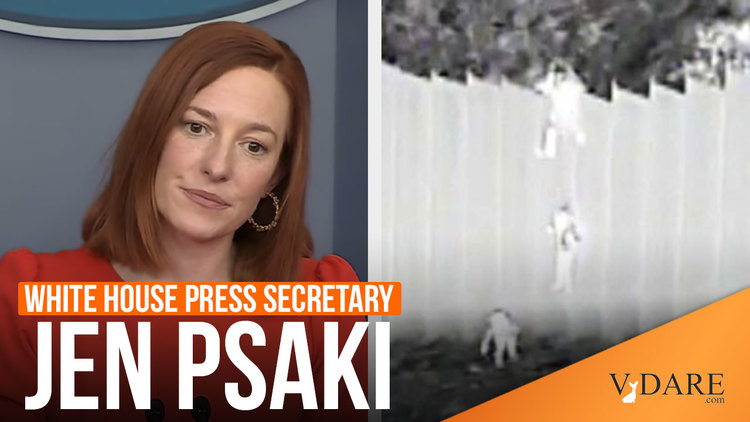 This White House press secretary Jen Psaki sets my teeth on edge. Apart from having a name that looks like something out of P.G. Wodehouse and sounds like the Japanese for "repo," she has a manner, a style of delivery, that could curdle milk.

Here she was on Thursday in some exchanges with Fox News' Peter Doocy. The topic here was people-smugglers dropping children into the U.S.A. from the top of a 14-foot border wall. The whole thing was recorded on video then tweeted by a BorderPatrol agent.

The children were little girls, aged five and three.

Doocy asked Ms. Psaki what the Biden administration was doing to prevent this kind of thing. Psaki, quote:

Fox's Peter Doocy repeatedly presses Jen Psaki about what the administration will do on border security in light of the horrifying video of toddlers being tossed over a wall and left in the desert by smugglers.

My milk curdled right there. "Tell me more about your concern"? What a low, repulsive way to field that question! The implication was that Doocy is an unkind person, more interested in stopping people entering our country illegally than with the well-being of these two tots. His "concern" is heartlessly nationalistic, not warmly humane like Ms. Psaki's and (by implication) the administration's.

Doocy buckled, replying that, quote: "The kids' safety is, as you've just mentioned, the main concern."

Actually it isn't. Of course no normal person wishes harm to infants; but the main concern of our government and its spokespersons ought to be the security of our country and the well-being of its citizens. Preventing harm to Guatemalan children is the concern of Guatemala's government and of international charities.

This is all of a piece with the hand-wringing we get from politicians and the media about how dangerous it is to trek north hoping to break into the U.S.A. "These poor migrants! They die of thirst in the desert! The smugglers prey on them! It's so dangerous!" Over in Britain citizens get the same pap from their ruling class in regard to illegals crossing the English Channel in flimsy rubber dinghies. "Some of them drown! Little kiddies! It's dangerous!"

Yes, I guess it is. Again, though, that is no proper concern of our governments. It's a big planet, and bad stuff is happening all over. If you find yourself losing sleep over that, make a donation to some appropriate international charity.

I want my politicians to manage our public institutions in ways that minimize danger to Americans. Whatever dangers are faced by Mexicans, or Guatemalans, or Congolese, or Cambodians—however regrettable, however distressing to contemplate—are no public business of America's. If I am a humanitarian I may wish to make it my private business, and I should be free to do so; but that's not what politicians are for.

There are neighborhoods near me, here on Long Island, that are dangerous, having been taken over by MS-13, a criminal gang from El Salvador, illegal aliens or the offspring thereof. I'll make the welfare of Central Americans my main concern when the politicians I've hired do something about that.