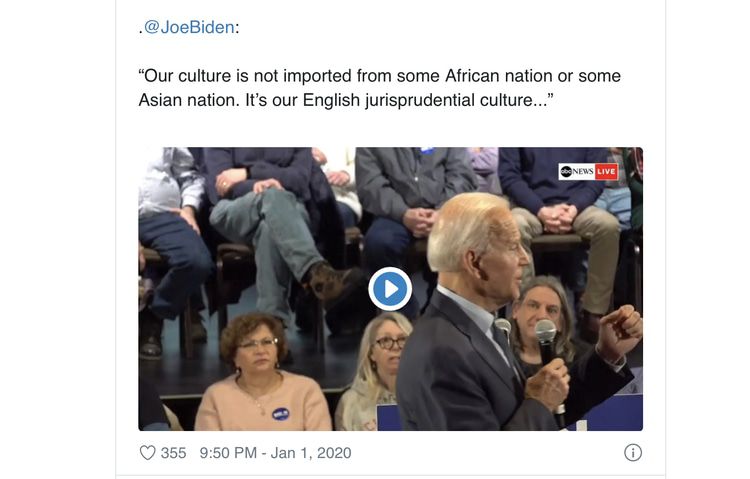 Joe Biden Says We Have An English Legal Culture. But Remember—He Said We Need To Scrap It Last March.

The late Samuel Huntington identified America's "Anglo-Protestant" core in his critically important work Who Are We: The Challenges To America's National Identity. This doesn't mean that only Anglo-Protestants are American. It means that Anglo-Protestants shaped the core culture and created American institutions. That's why schools used to teach British political history. Without understanding British political history, you can't understand America and the beliefs of the Founders.

Everyone used to know this. The name of this site remembers Virginia Dare, the first English child born in the New World, someone that progressives like Franklin Roosevelt used to commemorate. In our deeply stupid age, simply referring to America's Anglo-Saxon, British, or European culture has suddenly become offensive. When Jeff Sessions was still Attorney General, he said, "The office of sheriff is a critical part of the Anglo-American heritage of law enforcement." People whose ancestors didn't found America went nuts.

Now, it appears Joe Biden has committed some crimethink. He recognized "our English jurisprudential culture" and said America was not built as an African nation or an Asian nation. Scare tweet from our friends at the Daily Caller below:

No doubt, some Republicans are going to be playing "Democrats are the real racists" with this. I expect some real foolishness from Conservatism Inc. tomorrow. I'm dreading what Charlie Kirk will tweet [White Renegade of the Year 2019, by Gregory Hood, American Renaissance, January 1, 2020]. And us Dissident Right types are having fun. Biden will probably grovel too, which will be amusing.

Biden also rejoices about the prospect of whites becoming a minority and being displaced. (Not him of course, he thinks he should be president. But other whites.)

So yes, watching historical illiterates get angry on Twitter is amusing. But let's not kid ourselves. Joe Biden is right on the facts and recognizes American legal protections are based on the rights of free-born Englishmen. But he wants to scrap them in favor of woke culture, and he said this explicitly. That is truly terrifying.

The people who are just ignorant are far less dangerous than him.