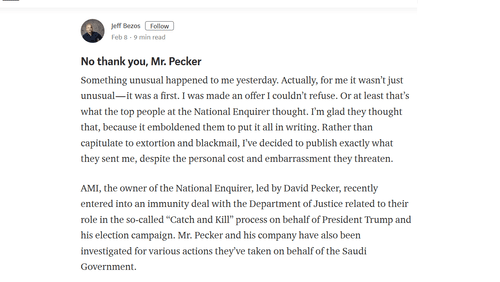 Jeff Bezos Is Shocked, Shocked to Discover Media Can be Politicized

World's Richest Man Jeff Bezos, owner of the Washington Post, is shocked, SHOCKED to discover that Trump-allied National Enquirer was out to get him over his affair with the TV reporterette.https://t.co/NGnnIvvEZj

There are a couple of interesting legal questions, involving blackmail and insider trading / SEC requirements for disclosure of material facts.

First, Bezos is claiming that the National Enquirer blackmailed him by proposing a deal: if he’d call off his private eye investigation of how they got his texts, they’d not publish the pics.

This reminds me of how Bill Cosby and David Letterman had people thrown in prison for blackmailing them. I suggested that to get people exposing unpleasant information about you locked up instead of given a Pulitzer Prize, it helps to be a popular TV comedian. But several legal scholars have explained to me several times what the difference is. Each time I’ve admitted, oh, yeah, that makes sense. And then I have forgotten it. But I have taken away the lesson: Don’t blackmail anybody without lawyering up first. The National Enquirer, which has been doing this kind of thing for a long time, is always immensely lawyered up. So we’ll see how this turns out.

Second, if a CEO who is arguably the world’s greatest businessman is engaged in private conduct that endangers his ownership of up to 50% of his holdings in his company, does he have a duty to stock market transparency to disclose that fact?

I imagine this has come up before. Insider trading laws are famously something of a philosophical conundrum: there appears to, by necessity, be a Prime Mover exception that the main man gets to initiate buying or selling stock on his own without disclosing it. This was an issue in the Michael Milken case three decades ago when Milken recruited front men to initiate hostile takeovers of publicly traded corporations. When Milken was accused of engaging in insider trading based on secrets shared with him by his front men, his defenders often argued that, well, obviously Milken was the Prime Mover, not his minion, so it was, legally, okay.

Presumably Bezos has every right in the world to secretly decide and plan to sell half of his stock for reasons of his own. Except … what if this sale is involuntary? Does a Bezos have an obligation to disclose secrets that endanger substantial portions of his ownership? If you analyzed whether to buy Amazon stock, your decision might hinge on questions such as:

Or what if Bezos was covering up some really serious misconduct, such as that 25 years ago he had gone to a Halloween party in blackface?