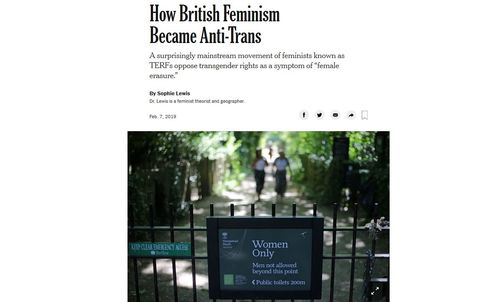 Last week, two British women calling themselves "feminists" stormed onto Capitol Hill for the purposes of ambushing a trans woman. Does the idea that transphobic harassment could be “feminist” bewilder you? You are not alone, writes @reproutopia. https://t.co/SYVlzuva1s

Here’s a truly wonderful New York Times oped, Coalition of the Fringes division, about how, while in America the natural order prevails in which transgender ex-men are rightly recognized as just plain all around more worthy than lesbians, in Britain’s Progressive Stack, perversely, lesbians are seen as more female than real women like Caitlyn Jenner. The author doesn’t quite get around to calling for the US Strategic Air Command to shoot cruise missiles at lesbian intellectual strongholds in Bloomsbury, but maybe next week … It reads like Godfrey Elfwick and Titania McGrath teamed up to hoax the Times by illustrating my point that the Coalition of the Margins don’t necessarily get along with each other, but I think it’s sincere. Or maybe not … Who can tell these days?

How British Feminism Became Anti-Trans
A surprisingly mainstream movement of feminists known as TERFs oppose transgender rights as a symptom of “female erasure.”

Sophie Lewis, a feminist theorist and geographer, is the author of the forthcoming “Full Surrogacy Now.”

I presume there’s a lot to unpack in that short sentence, but I’ll leave it for somebody else to do.

… If the idea that transphobic harassment could be “feminist” bewilders you, you are not alone. In the United States, my adoptive home, the most visible contemporary opponents of transgender rights are right-wing evangelicals, who have little good to say about feminism. In Britain, where I used to live, the situation is different.

There, the most vocal trans-exclusionary voices are, ostensibly, “feminist” ones, and anti-trans lobbying is a mainstream activity. …

The term coined to identify women like Ms. Parker and Dr. Long is TERF, which stands for Trans-Exclusionary Radical Feminist. In Britain, TERFs are a powerful force. If, in the United States, the mainstream media has been alarmingly ready to hear “both sides” on the question of trans people’s right to exist, in Britain, TERFs have effectively succeeded in framing the question of trans rights entirely around their own concerns: that is, how these rights for others could contribute to “female erasure.” Many prominent figures in British journalism and politics have been TERFs; British TV has made a sport of endlessly hosting their lurid rudeness and styling it as courage; British newspapers seemingly never tire of broadsides against the menace of “gender ideology.” …

The split between the American and British center-left on this issue was thrown into sharp relief last year, when The Guardian published an editorial on potential changes to a law called the Gender Recognition Act, which would allow people in Britain to self-define their gender. The editorial was headlined “Where Rights Collide,” and argued that “women’s concerns about sharing dormitories or changing rooms with ‘male-bodied’ people must be taken seriously.” Some of The Guardian’s United States-based journalists published a disavowal, arguing that the editorial’s points “echo the position of anti-trans legislators who have pushed overtly transphobic bathroom bills.”

… In America, however, TERFism today is a scattered community in its death throes, mourning the loss of its last spaces, like the Michigan Womyn’s Music Festival, which ended in 2015.

Was that too much to ask? Apparently, by the standards of Current Year America, yes.

… Such a posture positions queer theory and activism as individualistic, narcissistic and thus somehow fundamentally un-British.

It’s also worth noting that the obsession with supposed “biological realities” of people like Ms. Parker is part of a long tradition of British feminism interacting with colonialism and empire. Imperial Britain imposed policies to enforce heterosexuality and the gender binary, while simultaneously constructing the racial “other” as not only fundamentally different, but freighted with sexual menace; from there, it’s not a big leap to see sexual menace in any sort of “other,” and “biological realities” as essential and immutable. (Significantly, many Irish feminists have rejected Britain’s TERFism, citing their experience of colonialism explicitly as part of the reason.)

But perhaps the biggest factor in the rise of TERFism has been the relative dearth of social movements in Britain over the past three decades. It’s telling that Ms. Parker thinks it was the United States that exported “political correctness” and ideas like “gender identity” to Britain; it might even be fair to say that she’s right.

In other parts of the world, including America, mass movements in the 1990s, 2000s, and 2010s around the effects of globalization and police brutality have produced long overdue dialogue on race, gender and class, and how they all interact. In Britain, however, the space for this sort of dialogue has been much more limited. As a result, middle- and upper-class white feminists have not received the pummeling from black and indigenous feminists that their American counterparts have, and thus, their perspectives retain a credibility and a level of influence in Britain that the Michigan Womyn’s Festival could have only dreamed of.

Women really don’t stand a chance against the obsessiveness and aggression of men. I mean, lesbians can be pretty hostile and take-no-prisoners, but outside of a few holdouts like Britain, they are being thoroughly pummeled by the hyper-aggressiveness of the ex-men, rare as they are.