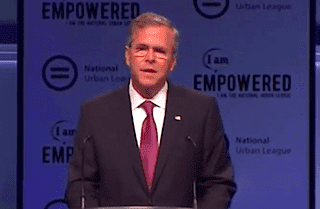 Jeb Bush: Obama "Speaking the Truth" on Race and Justice

There's a word for this that's been kicking around the last couple days...

Bush was touting his record on education when he decided to quote something Obama said during his eulogy for the African-American churchgoers killed in Charleston, South Carolina last month.

“When President Obama says that ‘for too long we’ve been blind to the way past injustices continue to shape the present,’ he is speaking the truth,” Bush said to applause from the audience in attendance. “But we should be just as candid about our failures in addressing injustices of the more recent origin,” he added in an attempt to move the focus from past to present.

Bush was speaking to the National Urban League. The problem with this approach is Bush doesn't really have anything to offer the National Urban League, or, for that matter, the #BlackLivesMatter movement. Instead, the effect of this is that Bush essentially says America is built upon racism and continues to be plagued with "injustice," but he isn't really going to do anything about it. It demoralizes the mostly White base of the Republicans and does nothing to appeal to angry African-Americans.

It's not like it even helps African-Americans anyway. As we see in Baltimore,

Baltimore reached a grim milestone on Friday, three months after riots erupted in response to the death of Freddie Gray in police custody: With 45 homicides in July, the city has seen more bloodshed in a single month than it has in 43 years...

With their deaths, this year's homicides reached 189, far outpacing the 119 killings by July's end in 2014. Nonfatal shootings have soared to 366, compared to 200 by the same date last year. July's total was the worst since the city recorded 45 killings in August 1972, according to The Baltimore Sun.

The collapse of public order in Baltimore has no political significance. It's not even an issue to #BlackLivesMatter protesters. This is a huge opportunity for Republican candidates to reframe the entire debate by talking about the need for law and order and putting protesters on the defensive.

But you can't do that when your campaign consists of apologizing for simply existing.