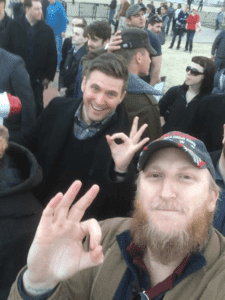 Members of the alt-right, led by Richard Spencer, protested outside the White House Saturday evening. They condemned missile strikes launched by the United States against the government of Syrian President Bashar al-Assad. In a bizarre turn of events, members of the far-left group Antifa turned up to protest against the alt-right anti-war rally though few would go on record about the missile strikes themselves.

Spencer, a proponent of ethnic nationalism, invited attendees by Twitter and YouTube to Lafayette Square in front of the White House for a “peaceful gathering against further military intervention in Syria”. Spencer emphasized that the 59 Tomahawk missiles fired by the Trump administration into the Shayrat military base in Syria could be only the beginning and that voters should, “tell Donald Trump unequivocally: not in our name. No more neocon wars” before it’s too late. 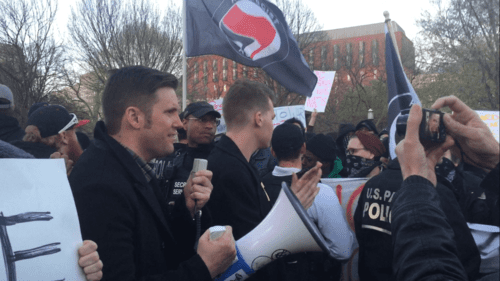 Shayrat is the base which administration official claim launched a chemical attack in the Northern Syrian town of Khan Sheikhun, killing 58.

When asked by reporters and Spencer himself about their perspective on the various Antifa protestors declined to comment. One Antifa supporter told me that he did not support the missile strikes but also did not support the alt-right because “they actually support Assad and support the genocide.” When asked what his solution to the Syrian conflict would be the Antifa activist replied, “Implement full Communism…seize the means of production.” When asked how Communism could be implemented during a full-blown civil war he declined to comment.

During the rally Spencer and the alt-right chanted “America first” “take a shower” “Fire Kushner” and “Build walls not wars”. The Antifa counterprotests shouted back “Fuck you Nazis” and “No Nazis, no KKK, no fascists USA.”

Towards the end of the rally events turned violent. One Antifa protestor broke through Spencer's line of bodyguards to throw glitter on his face and shoulder. An alt-right supporter tackled the Antifa to the ground and exchanged blows.

As Spencer and his associates made their exit from Lafayette they were chased down the street by Antifa .

At one point Spencer made it into a cab only to be assaulted by a mob beating on the windows with their fists.

One man opened the trunk of the vehicle and tried to reach for Spencer before his crew exited the vehicle and ran for a mile or more from pursuers before finally making their escape in another cab.

Police threw several of the Antifa assailants to the ground and began making arrests.