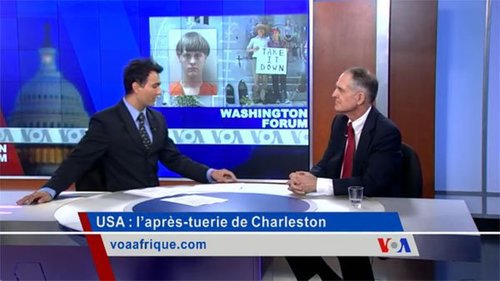 The prejudice of journalists is transparent, but I have rarely seen such a flagrant display of it as I did last night during an NBC interview in Washington. I am a patient man, but I took off my microphone and walked out of the studio.

Afterwards, I was struck by the contrast between the NBC interview and one I did on the same subject–Dylann Roof and the Charleston killings–for the French-speaking, West Africa service of Voice of America. Americans are often so closed-minded about race that they can only be described as bigoted. Africans, who have not been poisoned by years of anti-white propaganda, are much more open-minded.

The host of the NBC interview was a black man named Tony Harris, who has worked at CNN and Al Jazeera. Like so many journalists, he didn’t want to interview me; he wanted to argue with me. He began by saying he couldn’t understand how white people might have legitimate interests they would want to defend. I expected that. He asked me what had driven Dylann Roof to kill black people. I told him that according to Mr. Roof’s own manifesto, he was “truly awakened” when he went to Wikipedia and learned that the Trayvon Martin killing was not the white-racist murder the media made it out to be. Mr. Harris is apparently as ignorant about the Trayvon Martin case as Mr. Roof was before looking at Wikipedia. Mr. Harris seemed astonished when I told him the jury had acquitted George Zimmerman on grounds of legitimate self defense, and he asked one of the staffers to go look up the facts. I could see I was in for heavy sledding.

Mr. Harris then brought up someone I had never heard of: a black man named Michael Donald who was killed by alleged Kluxers in 1981. I said they must have gone to jail for a long time. He said one was executed. I said, “Good.” Mr. Harris started laughing, obviously incapable of believing that I was glad the killer had been put to death. “You think I’m disappointed they didn’t walk free?” I asked. He just kept laughing, so I told him the interview was over, and walked out.

You can only wonder about the sadly twisted mind of Mr. Harris. He clearly thinks that anyone who defends the interests of whites–anyone whom the SPLC has called a “hater”–wants blacks killed. He’s so convinced of this he laughed in my face when I denied it. This is the colossal ignorance we are up against: people who have such a hardened, caricature view of anyone they have been told is a “racist” that their minds stop working. This utter lack of imagination is testimony to just how deeply the facts-don’t-matter approach to race has been beaten into people’s minds.

At the Voice of America, the team of Africans who interviewed me last July could not have been more different. The on-air host was a light-skinned man from Mauritius, off the coast of Africa, but everyone else in the studio was West African. At NBC, except for the host, every one of the eight- or ten-man production team was white. This is exactly the kind of showy “diversity” you get from the networks. 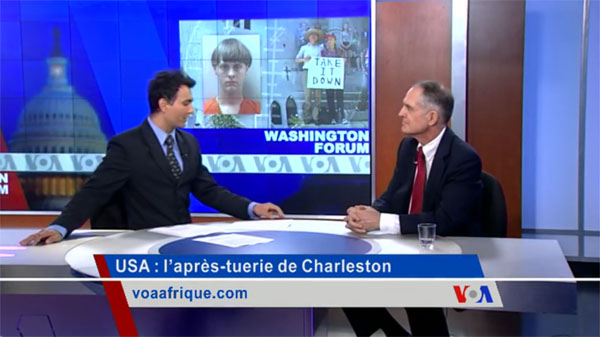 The host for the West African Service listened carefully to exactly the same arguments Mr. Harris refused to understand. When he disagreed, he did so politely. After the interview, he and everyone else in the studio told me how interesting it was to meet a white man who stood up for white people. The production team asked to pose for photos with me–all smiles–and then invited me back to their offices to introduce me to colleagues. We had a long, friendly jabber about race in America, and about the West African countries I have visited. They practically carried me around on their shoulders.

Tony Harris of NBC is a perfect example of why race relations in America are at a dead stymie. So long as people such as him–and Ta-Nehisi Coates and Eric Holder and all their white sycophants–refuse to see the reality staring them in the face, no progress is possible. It’s our job to make them see it.