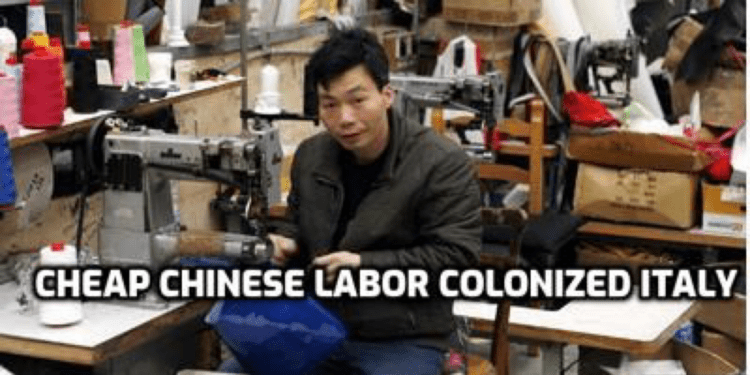 Over at American Renaissance, Gregory Hood has published the definitive look at what caused Italy to be the hotbed for the Coronavirus: large portions of the nation had become Chinese colonies. The entire article is well worth reading, because it confirms Enoch Powell’s frightening analogy of a nation "heaping up its own funeral pyre."

Though Powell was referencing England’s insane post-Empire policy of importing the Third World to the United Kingdom, Hood writes about how the Italian government and business owners in Italy have all but handed over the nation to Chinese expansion/colonization.

And this is the reason the China Virus/WuFlu spread so rapidly in Italy. Hood writes:

For decades, a large, sometimes hostile Chinese community has worked in the Italian fashion and textile industries. Immigrants — legal and illegal — started as a cheap, “exploited” labor source that allowed high-fashion companies to slap a “Made in Italy” label on products churned out in sweatshops. Now, Chinese own many off-the-books factories, ignoring employment and safety laws, and dodging taxes. They are also carving out a competitive niche in the fashion industry, and even buying up iconic Italian companies.

Was the China connection the reason the coronavirus outbreak hit Italy so hard and so early? So much immigration has been illegal — and so many Chinese factories don’t even exist on paper — that contact tracing and other disease control measures were impossible.

With these close connections, there is plenty of business and personal travel between Italy and China. It was inevitable that people would wonder whether Chinese smuggled into the country and working in cramped sweatshops could have introduced and spread the virus. At this point, with lax immigration law enforcement and spotty travel records, it’s impossible to know.

We do know that the first confirmed cases in Italy were Chinese tourists from Wuhan, but Wuhan is more than 500 miles from Wenzhou, which is where most of the Prato Chinese come from. The virus did hit Wenzhou, though, and many Chinese in Italy had gone home for the Lunar New Year, which was January 25. By the 29th, there were 172 cases in the province. It may be that Chinese returning to Italy after the holiday brought the disease with them — but this can’t be proven.

On January 31, Italy stopped direct flights from China, which the Chinese government called an “overreaction,” but by then, tourists or returning workers could have already brought the disease to Italy.

That said, one of the very first covid patients in Italy was an Italian who has never traveled to China. He went to the emergency room on February 19, but it was 36 hours before he was tested. He probably infected a number of people, including his father (who died from the disease) and his pregnant wife (who didn’t).

Also, Prato, has a very low infection rate. If test reports can be believed, not one Chinese has the disease. It certainly does not appear that Prato is a hotbed — and there may be an interesting reason for this. According to Reuters, Chinese who had returned to the city from New Year celebrations knew very well that a dangerous virus was spreading in China. Chinese therefore put their community into lockdown three weeks before Italy recorded its first infection. According to Reuters, “They knew what was coming and spread the word: stay home.” There is “some anecdotal evidence that Chinese people in [other parts of] Italy did the same.”

This suggests that the Chinese acted independently and thought only of themselves. It also means the Italian government has no idea what is going on in the community. Dr. Giorgio Palu, a virologist and former health official, said the Italian government acted too slowly because it was afraid of being called “racist.” But if the Reuters report is accurate, in early February, just when the mayor of Florence was telling citizens to “Hug a Chinese” to fight stigma and racism, the Chinese were already keeping their distance from each other.

Northern Italian fashion defines luxury, wealth, and status — but it’s built on a Chinese colony and off-the-books labor. The coronavirus outbreak reminds us that Sam Francis was right: Anarcho-tyranny is the ultimate stage of multiculturalism. Italy imposed draconian rules on its own people to stop the spread of coronavirus. At the same time, it doesn’t know how many Chinese are in the country, where they are from, where they work, or when they come and go. [Italy, China, and the Coronavirus, by Gregory Hood, American Renaissance, April 25, 2020]

Knowing how we got into the crisis of the China Virus causing entire countries to shut down and economies to crater is half the battle, and Hood has illustrated the insanity of open border policies: An Italian government/business community existing to enable the Chinese colonization of their nation was the sole reason the nation was ravaged by the China Virus.

Again, knowing why the China Virus ravaged Italy is half the battle; implementing policies to make sure the Italian people are protected from preventable evils must be the primary motivation of the Italian government moving forward.

The conclusion nationalists must be advocating incessantly when it comes to discussing the China Virus and its consequences is simple:  Diversity, Inclusion, Equity, and Tolerance (D.I.E.T.) are no virtues; putting the interests of your people first is no vice.