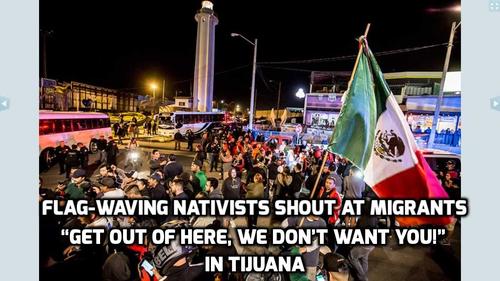 Demonstrators Shout “Get Out Of Here, We Don’t Want You” At Migrants—In Tijuana, Mexico

Did you hear about this in the Mainstream Media? A crowd of nativist protesters, some bearing flags, intentionally made its way to a migrant camp on the border where they shouted “Get Out of Here, We Don’t Want You”.

It’s not being publicized in our MSM because it happened in Mexico, in Tijuana on the border.

Oh, that explains it.

So what sorts of arguments are these Mexican nativists using?

They argued that they [the Hondurans] represent a risk for the community, both for security and employment in Tijuana.

In the United States we are constantly lectured by the MSM and many politicians (of both parties) that illegal immigrants are not a security or employment risk. So are things different in Mexico?

Note that these Mexican demonstrators went to the migrant camp to directly confront them. Imagine if this happened in the United States, the MSM would be going ballistic and blaming Trump.

“Get out of here, we don’t want you. We want you to return to your country, you are not welcome” shouted the inconformes [literally, the dissatisfied, here referring to the demonstrators] just meters from the border wall, where the migrants had set up a camp. The protest lasted until the early morning Thursday [November 15].

How xenophobic of these Tijuana people.

The group of inconformes criticized the government for giving help to foreigners while the locals also are obliged to flee the violence and poverty of their own country. They also asked for an improvement in security.

The Hondurans in Tijuana, of course, see things differently.

“We are not criminals. Why do treat us like that here? In all the rest of Mexico that we crossed they treated us well. Think of the children that are here, please!” some Hondurans were saying during the confrontation, in which both sides were throwing stones for a few moments.

The Hondurans ask why the people in Tijuana treat them differently than those they encountered the rest of Mexico.

Isn’t it obvious? The people in the rest of Mexico helped them because they wanted them to continue on their way and not stay. In Tijuana, on the border, people are afraid that the Hondurans won’t get into the U.S. and will stay in Tijuana. That’s the difference.

And note the violence—stones being thrown.

There are photos in the Excelsior article. Note that a few of the Mexican protesters are bearing Mexican flags. How nationalistic of them! Do they believe in “Mexico First”?

The comments section has some interesting comments, also.

For example, Agustin Arias Sanchex writes, sarcastically, I assume, that

“The Gringos are the Racists! Here we just have doubts about security, health and employment. “

Or Issa Rosbel, who wrote that

“…they are criminals, from the moment that that entered a foreign country without authorization and by force…And yes, we must think of the children, and that’s the first thing these people should have done, before departing with young children on a dangerous adventure. “