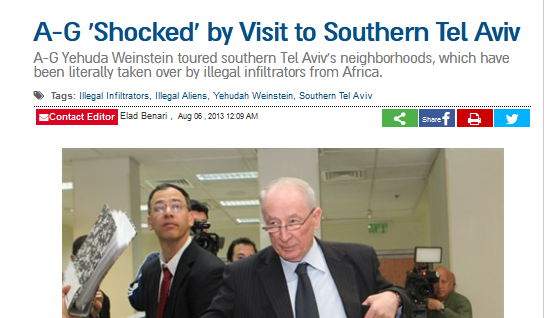 Can you imagine Eric Holder doing this?

Attorney General Yehuda Weinstein on Monday evening toured southern Tel Aviv’s neighborhoods, which have been literally taken over by illegal infiltrators from Africa, and was shocked by what he saw and heard...

The local residents approached Weinstein and told him about the daily harassment and crimes they are forced to deal with.

Residents of southern Tel Aviv have been suffering from endless harassment, fear and violence perpetrated by the many illegal Eritrean and Sudanese infiltrators who enter Israel to find employment and come to live in their working class neighborhood. The residents, along with Border Guard officers, accompanied Weinstein during his tour.

"It is the government’s policy to combat this phenomenon," Weinstein told the dozens of residents and infiltrators who gathered around him. "This phenomenon is difficult, especially in our country, which is too small to contain such a large quantity of infiltrators. We took a number of steps, including building a border fence and passing laws that we helped to enact, but the problem still exists. [The infiltrators] certainly raise difficulties that should not be belittled. We are acting proportionately and cautiously and to the best our ability to handle this difficult and complex problem.”

Weinstein told the residents that he was glad about the visit simply because it enlightened him as to the reality they face. He added that he planned to come up with a new legal procedure that will prevent the continuation of the status quo.

The security fence that was built along Israel's southern border has brought the number of infiltrators almost to a halt, but there are tens of thousands already concentrated in southern Tel Aviv and Eilat, with a smaller number in Arad, Ashdod and other areas.

Interior Minister Gideon Saarrecently toured southern Tel Aviv in an effort to learn up close about the infiltrator problem, which former MK Yaakov Katz (National Union) brought to the country's attention as head of the Knesset Committee on the issue.

Saar said that the problem is "one of the most difficult, sensitive and delicate problems that Israeli society faces."

"This problem did not form overnight and I recommend against creating the impression that it can be solved overnight. The situation needs to be changed, and this is what I intend to do."

In April, MK Elazar Stern (Hatnua) was attacked by an illegal infiltrator from Eritrea as he was visiting neighborhoods in southern Tel Aviv.

Can you imagine a U.S. congressman getting attacked by an illegal alien?

During the visit, Stern tried to cross a street along with the residents, when an infiltrator, who had been following them, tried to obstruct his way. One Israeli resident yelled at the infiltrator and asked him to go away. The illegal infiltrator reportedly opened his shirt to show a large cross, then attacked Stern from behind and hit him in the head, knocking down his kippah and stepping on it.

Following the assault, MK Stern said, “These are phenomena that would not be tolerated anywhere else in the world, but occur right here among us.”

As we know, that's not correct.