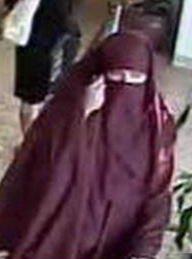 From San Diego County comes news of a burqa bank robber (pictured) who failed to snatch the cash but did manage to escape. The fugitive was described as wearing white shoes and a maroon tent.

Burqa banditry is a growing crime strategy because the all-covering garment reveals little about the perp, plus many Americans are too fearful of being called Islamophobic to object to masked persons in the public space.

Islam scholar Daniel Pipes recently wrote of his home town Philadelphia’s surge of the crime, counting 15 successful or failed burqa robberies over the last six years. Pipes also keeps a blog on the general topic of burqa crimes starting in 1998 and continuing to the present.

Isn’t it long past time to make masks in public illegal? Why does our nation allow such anti-social — and likely criminal — behavior to continue? Masks are a threat to public safety, and also show up when anarchists come around. The only good excuse for a mask is a sub-zero Minnesota winter.

Of course, the real solution would be to end Muslim immigration entirely. The Allah-worshippers are trouble wherever they settle in large numbers, from Paris to Dearborn.

NATIONAL CITY (CNS) – A woman tried to rob a bank in National City, and officials sought the public’s help locating her.

The attempted robbery occurred at around 6 p.m. Thursday at a Wells Fargo Bank branch at 1199 Highland Ave., according to FBI Special Agent Darrell Foxworth.

“At the time of the robbery, the woman entered the bank and stood in the teller line until summoned by a teller,” Foxworth said. “Upon arriving at the teller counter, the woman presented a demand note.”

The teller read some of the demand note then alerted another bank employee, Foxworth said.

The woman waited a few seconds then walked out of the bank without any money, according to Foxworth.

No injuries were reported.