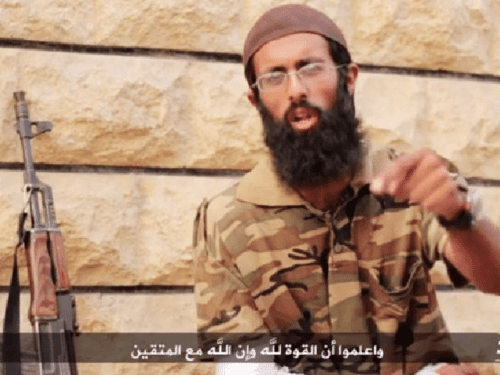 Islamist Jihadist from Britain Kvetches About His Syrian Co-workers

Liam Deacon in Breitbart’s has alerted us to this posting by a British Ali G-type, a supermarket security guard, who has gone off to Syria to engage in jihad (apparently he’s currently with ISIS, although, admittedly, I have a hard time keeping straight which Syrian terrorist organization is which). But he has a few things to get off his chest about his Syrian hosts that ought to be of interest to Europeans currently besieged by Syrians and pseudo-Syrians.

Although I realize that all the smart money thinks that Ms. Merkel has pulled off a huge economic coup by inviting in vast numbers of Syrians, after reading this you might want to think about shorting Audi and Mercedes-Benz stocks.

Arabs as a whole have a unique culture, which differs dramatically from the western lifestyle. If one is unaware of these cultural differences, then it could be quite peculiar, annoying, and at times somewhat stressful to interact and associate with them. Arabs are quite unique in their habits, so it is vital for the western Muh?jir to acquaint himself with their cultures to prevent clashes and disputes.

Below I shall list a few of their habits which Arabs are known for:

This is a common habit for Arabs in the Middle East. I remember an incident from when I first came to Sh?m; I was sitting in rib?t next to another British brother, and as we were talking a Syrian brother came into the room and sat between me and the brother, he then reached for my backpack and opened it. The brother didn’t ask my permission but apparently that was not needed as it’s the habit of Arabs to go through other people’s property without their permission. As I sat there, he took out all my clothes and other gear from my backpack and examined each item before placing it on the floor.

As he was doing this, I was speaking to the other British brother asking him what was going on, and he told me that this was the norm here in Syria. Initially, I thought this was just a one off incident, but as time went on I realised this was a habit of our Arab brothers.

On another occasion an Indonesian brother was working on his laptop and was using it to speak to his family (or friends) back in Indonesia. After some time he went to go eat so he left his laptop open not expecting anything to happen, as no one really goes through other people’s property without permission, right? Wrong! As he was in the other room eating, an Arab brother went through his laptop and deleted all his conversations the brother was having with his family on his Messenger service. He also deleted his web server and was browsing the net without hesitation.

When the Indonesian brother returned and realised what happened, he got upset and thereafter put a password on his laptop.

During my time with Arabs, I have only noticed one Syrian brother who asked permission before going through my bag, and due to him asking permission I allowed him to go through my stuff, even though I didn’t like it.

Arabs in general do not know where the red line is in giving another brother his space, and this is in their culture, maybe because they see this as a form of strong brotherhood. Whatever the reason it’s annoying so patience is required. …

In the west, it is common knowledge to walk out of a room wearing the same pair of shoes that you wore while entering the room. Nay, it is common sense. However here in Sh?m, our Syrian brothers have a very peculiar philosophy whereby they believe that everyone can share each other’s footwear, irrespective of foot size. Someone who is a size 40 will casually walk out the room wearing your footwear even though you are a size 44, and strangely he may not even realise. Weird? Of course it is.

From my very first month here in Sh?m, I would experience this; I would enter a room with my shoes, and when leaving I would notice my footwear was missing. This is too common here in Sh?m. For some reason (known best to Syrians), what’s yours is theirs and what’s theirs is yours, even if you disagree with it. …

As Westerners we are naturally good at administration work as our whole life is based on an organised structure. From school days to work life, we have a systematic structure in place on how to deal with issues. In every system we have the hierarchy structure. For example, in school we have the teacher above us, above whom is the deputy head, above whom is the head teacher. Everyone has a role to play in the system and everyone knows his job role in the organisation.

Unfortunately in the Arab world, building a structure and administrating it is not one of their strong points. There are many flaws and errors in putting an Arab in charge, especially if he is uneducated (which sadly is the majority).

It is common to hear an Arab in administration reply with the words “bukrah insh?All?h” (which means “hopefully tomorrow”) or in plain English, “I’m too lazy, leave me alone and come back some other time!”Unfortunately, Arabs run the system here in Sh?m and they are, from what is apparent, the laziest and unfit for their jobs. All praise is due to All?h that Dawlah has a system in place, however with Arabs running it, it has many deficiencies.

The typical Arab in administration tends to be very lazy. As explained above, the phrase “bukrah insh?All?h” is always said as a cover when they cannot be bothered to do anything. …

Another ‘great’ feature of Arabs in administration is that there is no queue in any of their offices. You could be waiting in line for half an hour and then another Arab would come and push in the queue and go straight in. Even more ironic is that he would even barge in front of the guy who is speaking to the admin. It’s not unusual for Arabs to push in nor is it unusual for them to interrupt you while you’re speaking to the admin. And because the admin is also an Arab he also sees no issue in another person interrupting you. Strange indeed how he can be speaking to you one second, listening to your concern, and then totally ignore you and talk to another guy who just pushed in and deal with his case, even though this new guy may take about 10 or 20 minutes of his time; and when he finishes dealing with him, he will look at you, and without apologising expect you to remind him of everything you were saying.

So what is the solution to dealing with Arabs in administration? The solution is twofold. Number one; to pray to All?h that He replaces the Arabs with others who know what they are doing. Number two; and a more practical solution, is to shout at them while asking for what you need. Although this may sound quite harsh, this is the only solution, and many westerners have learnt this the long and hard way….

Not only do chicks dig Chechens, but lazy, disorganized, incompetent Arab bureaucrats are terrified of them. So, Europe can look forward to a future in which acting like a Chechen maniac is the best way to get ahead in life. In once what was the land of Kant, Ramzan Kadyrov looks like the future.

Arabs in administration is a recipe for disaster. …

This one is very amusing. Syrians love to stare at foreigners, maybe because no tourist has ever visited Syria. …

From the very moment I arrived in the Turkish airport, I was greeted by Syrian beggars. Professionals who make a living off of other people’s generosity and kind-heartedness. In the airport you may be confronted by a ‘poor’ Syrian man who is trying to get enough money to book a flight to another country. These beggars are professionals and it is advised not to give them anything, not even a second glance.

When people first come to Sh?m they are somewhat naive and inexperienced with beggars so they may give a lot of money to a professional beggar. Most beggars here in Syria are fraudsters who take advantage of the Muh?jir?n. …

11) Dealing with shop keepers Here in Syria Dawlah has a reputation of being wealthy. The average Syrian looks at a Dawlah brother as a walking bank, and unfortunately shop keepers are no exception. So many times when asking a shop keeper for the price of an item, he would contemplating for a while then give you a higher price.

This is something which every single Dawlah brother has experienced. Wherever Dawlah goes, shop keepers benefit. No doubt there are those who are honest merchants, yet sadly they are few. The vast majority are money-lovers who think we are unaware of their petty actions. …

Coming from the west, we have certain rules and regulations which we abide by while on the road. These are for our own benefit to prevent accidents and henceforth, complications. In the Arab world however, there are not that many rules for the highway, and one can easily obtain a driving license without any test. Yes I know, very scary indeed!

… It is also a habit for motorists to drive on the opposite side of the road, even if the road is only wide enough for one car. For those of us coming from the west the road can be very stressful at times. …

These are pretty much the same observations as T.E. Lawrence made about Arabs in The Seven Pillars of Wisdom over 90 years ago, and he was infatuated with Syrians, literally.