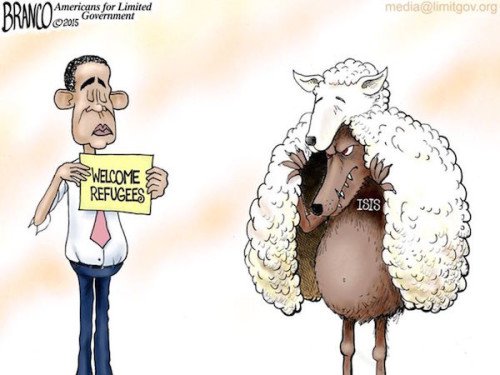 Secretary of State Kerry announced over the weekend that the United States would take substantially more potentially dangerous refugees from Syria. Did the administration not read reports that ISIS is using the chaos to insert jihadists into the hordes of illegal aliens flooding Europe?

Despite the obvious danger to Americans, Kerry stressed that he intends to admit more refugees if possible. He discussed national security as if it were an excuse rather than the government’s most important job. In Kerry’s eyes, the respect of his peer group — other diplomats — is the important thing. To keep that regard, he has to demonstrate his liberal values of caring for the diverse, even when they are historic enemies of 1400 years standing.

KERRY: “I’m pleased to announce today that the United States will significantly increase our numbers for refugee resettlement in the course of this next year and the year after. Last year, I think we were at 70,000. We are now going to go up to 85,000 with at least, and I underscore the ‘at least’ — it is not a ceiling, it’s a floor — of 10,000 over the next year from Syria specifically, even as we also receive more refugees from other areas. And in the next fiscal year, we’ll target 100,000, and if it’s possible to do more, we’ll do. One of the reasons it’s difficult is that post 9/11, we have new laws, new requirements with respect to security, background checks and vetting. It takes longer than one would like and we cannot cut corners with respect to those security requirements.”

Is there a worse idea imaginable? Refugees cut loose from their homes and associations cannot be adequately examined, as many security experts have explained. Furthermore, Muslim immigration should be ended, not expanded.

Mike McCaul, Chairman of the House Committee on Homeland Security, recently observed, “Many Americans are understandably concerned about the threat posed by inadequate security screening procedures for refugee seeking entry into the United States. ISIS themselves have stated their intention to take advantage of the crisis to infiltrate the west. We have to take this threat seriously.”

On September 18, McCaul introduced the Refugee Resettlement Oversight and Security Act to give Congress oversight of the increased Syrians being brought into American communities.

Senator Jeff Sessions expressed his concern about increased numbers of refugees with a look at the big picture of how immigration of various categories is running at record highs, while the ability of the nation to cope with the influx is diminished by overcrowded schools, the weak economy and other factors. Just last week, the senator called for a long-term strategy to deal with Islamist ideology, and that did not include inviting thousands more of them to live among us.

WASHINGTON—U.S. Sen. Jeff Sessions (R-AL), Chairman of the Senate’s Subcommittee on Immigration and the National Interest, responded today to the announcement from Secretary John Kerry that the U.S would increase its intake of refugees over the next two years to nearly 200,000, in addition to the existing annual resettlement of asylees, illegal border-crossers, foreign workers, and global green card recipients:

“The U.S. has already taken in four times more immigrants than any other nation on Earth. Our foreign-born population share is set to break every known historical record.  Since 9/11, we have permanently resettled approximately 1.5 million migrants from Muslim nations inside the U.S.  Ninety percent of recent refugees from the Middle East living in our country are receiving food stamps and approximately 70 percent are receiving free healthcare and cash welfare.  All of the nearly 200,000 refugees the Administration is planning to bring over the next two years would be entitled to these same benefits the moment they arrive.  Since we are running huge deficits, every penny of these billions in costs will have to be borrowed and added to the debt.  This refugee expansion would be in addition to the 1 million autopilot green cards handed out each year by the government to mostly low-wage migrants, including a large share from Middle Eastern nations.

“Our schools, job markets and public resources are already stretched too thin. And, even at current rates, we have no capacity to screen for extremist ideology, as we have seen with the surge of ISIS recruitment in Minnesota’s Somali refugee community.

“Middle Eastern nations must take the lead in resettling their region’s refugees. The goal of responsible refugee resettlement should be to relocate displaced persons as close to their homes as possible and to seek their return to their country of origin in more stable conditions.   It has also been reported that 3 in 4 of those seeking relocation from the Middle East are not refugees but economic migrants from many countries.

“At bottom, it is not a sound policy to respond to the myriad problems in the Middle East by encouraging millions to abandon their home.  Absorbing the region’s migrants is not a long-term strategy for stabilizing the region; instead, we should look soberly at our most recent actions in Libya, Syria, Iraq and elsewhere while encouraging migrant populations to remain in the region where they can contribute to social and political reforms.”