Does it ever stop? The Irish are back with yet another plea for legalization for their tribe. Theres a new ambassador from the Emerald Isle, and one of the early actions of Anne Anderson for US-Ireland relations has been to endorse amnesty for Irish lawbreakers.

The illegal Irish boosters have the idea that they deserve special consideration because of the immigration history with this country. They have a sense of entitlement second to none, and seem unaware that the US need for labor is quite different compared with a century ago.

Whats squirrelly in the current report is the assertion that Republican House members were surprised that some illegals were non-hispanic Irish persons. In fact, the illegal Irish have been persistently lobbying against American sovereignty for years: 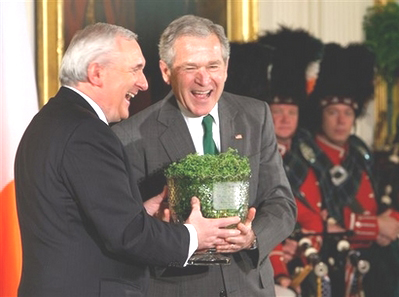 The resolution of this issue would mean enormous amounts to so many Irish men and women, Ahern said of the 50,000 to 70,000 illegal Irish immigrants in the United States. I fervently hope that they will, in the not too distant future, be able to step away from the shadows and into the sunshine of this great country.

The efforts of the Irish Prime Minister was one of numerous campaigns, both governmental and from illegal Irish themselves for amnesty. We’ve sent busloads of Irish to Washington,” said Kieran O’Sullivan, a Boston-area legalization activist in August.

So its rather doubtful that anyone in Congress was unaware about Irish amnesty lobbying. But emphasizing non-hispanic illegal immigration makes for a nice sound bite and allows the Irish feel special about their lawbreaking.

Ireland’s new ambassador is actively meeting with House Republicans to try to sway them on immigration reform. “For many of them, they have been surprised. They think of this as a Hispanic issue.”

WASHINGTON — Ireland’s new ambassador to the United States is throwing her nation’s weight behind calls for American comprehensive immigration reform.

Anne Anderson, who began her term as ambassador in September, argues changes to the immigration system are needed to reflect “the historical and contemporary relationship” between the two nations.

She has the backing of the Irish parliament and head of government, Taoiseach Enda Kenny — and she’s “spent a considerable amount of that time talking to [House Republicans] about” immigration reform, Anderson said in an interview with BuzzFeed.

Indeed, Anderson has been holding regular meetings with Republican lawmakers, and the embassy is working with a coalition of Irish-American cultural, business, and civic organizations to organize the estimated 40 million Americans who trace at least part of their ethnic heritage to Ireland.

And while Anderson acknowledged the path to reform is difficult, she argued bringing a non-Latino face to the debate is helping win over some House Republicans.

“For many of them, they have been surprised. They think of this as a Hispanic issue, which is not surprising given the numbers,” Anderson said. “There is increasingly a deeper understanding of the complexities of this issue, and that it’s not just one community,” Anderson explained.

Anderson’s emphasis on immigration comes as Irish-American business and civic organizations have increasingly become involved in the push for a comprehensive reform to the nation’s immigration rules.

Part of the push comes in response to “the situation of the Irish undocumented here.” While the estimated 50,000 to 75,000 undocumented Irish make up a relatively small percentage of the estimated 11 million undocumented immigrants in the United States, “in a country the size of Ireland … that makes quite an impact,” Anderson said.

But the Irish government is also concerned with the relative difficulty its citizens have in obtaining green cards: Between 2000 and 2012, only 15,000 of the total 10 million green cards issued to immigrants went to the Irish.

“The other side of the coin is the extreme difficulty for Irish people to come work here … [which] has fueled the undocumented problem,” Anderson said, adding that “the extent to which the Irish have improved this country … and helped to build this country, that’s just a tiny, tiny, tiny percentage.”

Unlike past emigration waves out of Ireland that were often made by low-skilled workers, many Irish who are leaving come from the nation’s high-tech sector. “They’re the kind of people who can make a contribution. Now they’re going other places,” Anderson warned.