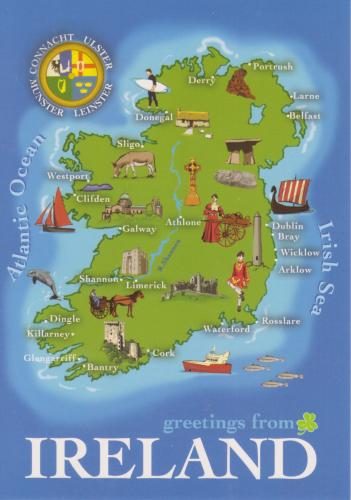 The Irish are back — now with hands outstretched for a special visa category in the all-encompassing open-the-floodgates immigration bill because they believe they are special, what with their history of millions bailing off the island for export to America. That background gives them a unique entre, they figure: therefore, the Irish deserve more visas now.

Naturally, the Irish want their estimated 50,000 illegals given amnesty along with the millions of Mexicans; that goes without saying.

The Irish are not the only ones standing in the mooch line for special treatment; a number of nations have lobbyists seeking a bigger advantage for their team:

The government of South Korea hired a former CIA analyst, two White House veterans and a team of ex-congressional staff members to help secure a few paragraphs in the giant immigration bill.

The government of Ireland, during St. Patrick’s Day festivities, appealed directly to President Barack Obama and congressional leaders for special treatment. And the government of Poland squeezed Vice President Joe Biden and top lawmakers on Capitol Hill for its own favor, a pitch repeated at an embassy party last week featuring pirogi and three types of Polish ham.

Those countries, and others, succeeded in winning provisions in the fine print of the 867-page immigration bill now before Congress that give their citizens benefits not extended to most other foreigners.

Ireland and South Korea extracted measures that set aside for their citizens a fixed number of the highly sought special visas for guest workers seeking to come to the United States. Poland got language that would allow it to join the list of nations whose citizens can travel to the United States as tourists without visas. And Canadians successfully pushed for a change that would permit its citizens who are 55 and older and not working to stay in the U.S. without visas for as much as 240 days each year, up from the current 182.

South Korea alone has four lobbying firms in the campaign, paying them collectively at a rate that would total $1.7 million this year, according to required disclosure reports. Other nations generally relied on their own ambassadors and embassy staff to make the push, meaning there is no way to track how much has been spent on the effort. [. . .]

Indeed, lawmakers are pushing to grant special benefits to others, including Tibet, Hong Kong and parts of Africa. [. . .]

Interestingly, the New York Times reported in 2005: More Africans Enter U.S. Than in Days of Slavery.

Why the Irish Want a Special Immigration Deal, ABC-Univision, May 17, 2013

Immigration from Ireland hit its peak in the 1850s, when more than a million Irish immigrants — many fleeing their homeland because of famine — became legal permanent residents.

It’s fallen quite a bit since then. In the 2000s, the number of Irish legalizing was only about 1.5 percent of what it was back in its heyday.

Yet Irish interests quietly remain part of the immigration debate in Washington.

An immigration bill being considered in the Senate would give special consideration to several countries for future immigration. South Korea, Poland and Canada are all hoping for their own part of the deal. And so is Ireland.

This wouldn’t be the first time the Irish have gotten special consideration.

One of the most notable examples was the so-called diversity lottery. During the early ’90s, as the program was getting off the ground, 40 percent of visas were earmarked for Irish, thanks to the late Sen. Ted Kennedy (D-Mass.)

But that visa allotment was temporary, and groups like the Irish Lobby for Immigration Reform (ILIR) are hopeful the Senate bill will create a more permanent program. A provision added by Sen. Charles Schumer (D-N.Y.) would make 10,500 renewable visas available to Irish nationals each year.

To see why the Irish might need their own deal, I spoke to Niall O’Dowd, the founder of the ILIR and the editor of the New York-based Irish Voice.

Adverse effects of the 1965 immigration law
Prior to 1965, the immigration system overtly favored European nationals over people coming from other parts of the world. Then Congress passed an immigration bill that scrapped that system in favor of more even visa distribution.

While that meant opportunities for immigrants from Latin America and Asia — and ended clear discrimination — it cut visas for European nationals.

“It’s been impossible for Irish people to emigrate legally to America since 1965,” O’Dowd said. “The new preferences militated against Irish people; indeed, any people coming from Europe.”

He’s right. While the migration flows from Ireland are much smaller than from a place like Mexico, for example, you can see a drop in Irish that were able to become legal permanent residents around the time that the 1965 law was passed.

That said, part of the reason the number of visas to Irish dropped was that they were no longer benefiting from a discriminatory system.

Out of 11 million undocumented immigrants, that isn’t a huge number. But O’Dowd believes that the poor economy in Ireland and the historic migratory ties to the U.S. will keep Irish people coming.

“Our people are still coming here, but they’re coming illegally, which is no way to go,” he said. “We’re trying to regularize future flow.”

Creating legal pathways for immigrants who would be coming anyway makes sense. But the countries that send the most people illegally aren’t getting this type of deal.

Which makes you wonder, why Ireland…

A Shared History — and Connections
“We’ve always had a program to help Irish immigration,” Sen. Schumer said at an immigration reform hearing on Thursday. “America and Ireland are bound together by history, traditions and common ancestry.”

While that’s true, a lot of nations share history and heritage with the U.S.: Germany, Italy, Mexico, the Philippines. But we don’t typically use that as a basis to give out visas.

O’Dowd explained how Ireland found its way onto the immigration reform agenda:

“We have strong political clout,” he told me. “We’re very friendly with Chuck Schumer here in New York, he’s been a great supporter on this issue…We’re working with John McCain who’s been a friend of ours for years, as well.”

In the end, that’s probably the best answer.

The boom in Irish migration to the U.S. happened 150 years ago, but the long-term impact of that wave still resonates. More than 34 million Americans claim Irish ancestry, according to the Census Bureau.

Listening to the immigration debate in the Senate, discussing visas for the Irish is a rare moment when the conversation shifts from questions of the economy and “rule of law” to sentimentality.

Obviously there are Irish immigrants who have a desire to come to the U.S. legally. But it’s hard to make a special case just based on desire when there are so many other people who want to come here from around the world.