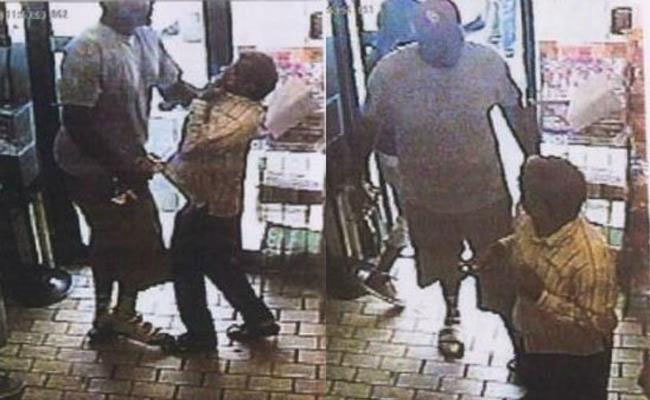 The police shooting of Michael Brown initially renewed calls for increased use of videocameras to record evidence of abuse, a reform I’ve long supported.

However, the Friday release of security footage of Michael Brown stealing and physically bullying an immigrant shop clerk minutes before his fatal police confrontation has led to demands from respected black leaders, the Democratic governor of Missouri, and President Obama’s Department of Justice for heightened protection of the Public’s Right Not to Know.

FERGUSON, Mo. (CBSNewYork/AP) — Addressing a congregation in Ferguson on Sunday, the Rev. Al Sharpton blasted the release by police of a video purportedly showing Michael Brown robbing a store shortly before the unarmed man was shot and killed by a police officer. …

Police released surveillance video they say showed Brown shoving a clerk before he left the store with a $50 box of cigars.

“I have never in all my years seen something as offensive and insulting as a police chief releasing a tape of a young man trying to smear him before we even have his funeral or his burial,” Sharpton said.

“First of all, if this is the young man, y’all quit trying to exaggerate,” the Harlem civil rights activist said. “That was shoplifting, not robbery. … Robbery, you break in, stick something up. Shoplifting, you take some cigars. It’s wrong if he did it, but call it what it is.”

Missouri Gov. Jay Nixon [D-MO] said Sunday the video produced a negative reaction. He said his office did not know the video was going to be released.

“I think it had an incendiary effect,” Nixon said in an interview on CBS’ “Face the Nation.” “When you release pictures and you clearly are attempting to besmirch a victim of a shooting, shot down in his own street, a young man, and at the same time you’re releasing information … to tarnish him, then properly, there was a lot of folks that were concerned about that, and I do think it flamed it back up and has caused us to have to deal with some of that.”

It’s a simple concept: any found footage that undermines the Democratic-Media Narrative Complex storyline of the moment should never see the light of day. The public deserves to be protected from any Doubts.

And from Yahoo News:

… Sharpton was definitely the orator the huge crowd came to see, and he did not disappoint.

He began a short, powerful, applause-line-filled speech by declaring that the shooting of Brown represents a pivotal moment in what he views as a much larger fight for the rights of people around the world against the repressive forces of government.

“We…have…had…enough!” Sharpton pronounced, adding that people who agree with him could make a difference at the ballot box.

“Nobody can go to the White House until they stop by our house!”

The famous activist demanded to know why police had released a videotape of Brown shoplifting from a now-looted and burned-out convenience store. Sharpton said that he does not condone shoplifting, but he also doesn’t believe the tape has anything to do with the subsequent shooting of Brown by police officer Darren Wilson.

Sharpton was of course the main inspiration for the Rev. Bacon character in Tom Wolfe’s 1987 book The Bonfire of the Vanities, which remains the single most relevant explanation of racial politics in America in 2014.

Let me sum up.

It would be a very good thing if police officers could always nonlethally subdue belligerent 6’4? 292 pounders accosted during their crime sprees. In fact, it may very well be that the cop screwed up in various ways in this case and should be disciplined.

But the important issue is what has been revealed once again about how the dominant worldview spread by the national media and the White House is based not on a careful regard for facts but upon equal parts stupidity, lies, wounded amour propre, and sheer opportunism.

We are told over and over about how white racists are waging war on black babies and other improbable assertions. And over and over the handful of incidents upon which the American Establishment chose to go to metaphorical war upon average Americans turn out to be travesties. But any resistance from skeptics is only demonized as more proof of white racism.