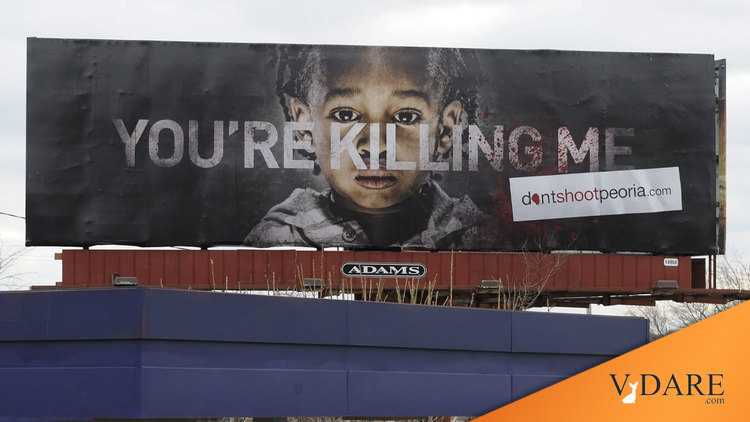 Earlier: In Peoria, Some People Did Something, Gun Violence Broke Out (13 Shot, No Deaths)

Ask yourself: has such a community meeting ever been necessary in any white community in any city across America?

PEORIA, Ill. (WMBD) — Some Peoria community leaders are fighting what they call a “spiritual war.”

Some called the recent uptick of violence in the city a “black genocide.”

“Now with a record-setting number of homicides, we thought that it’s time to revisit this event with the war of black genocide in the black community,” said Agbara Bryson with the Annie Malone Center for Development and organizer of the panel.

The purpose of the panel was to discuss and educate what causes black-on-black crime and offer community solutions.

One big topic of discussion was modern music that young children listen to.

One panel member spoke on the harmful “drill” lyrics from rappers like Lil Durk. He argued the lyrics glorify violence, and young children chase violence in order to chase fame.

He asked the audience if anyone knew who Lil Durk was, and only the youngest two children raised their hands.

Police Chief Eric Echevarria was in attendance. He called on the clergy of the community, saying there are 300 churches in the city that can make a big change.

The Director of School Safety for District 150, Demario Boone, was also in attendance, said there needs to be an abundance of collaboration to achieve violence intervention and prevention.

“The secret to my success: I use everybody else,” he said.

A self-identified former gang member and drug dealer said he realizes he is part of the problem that catapulted the violence. He asked the panel, specifically the chief, where the guns are coming from. He said he would never have been able to get weapons like that.

Chief Echevarria said there have been about 300 guns stolen in Peoria this year, and they have only been able to recover about half of them. He said many are also purchasing gun parts online and making “ghost guns.”

Carl Holloway, the Executive Director of Motivating Adult and Youth Individually, or May I Community Outreach, said mentorship can be a very powerful tool to curb violence.

“If we can increase the positive options for our youth, I think that will decrease the negative actions and thoughts that they put into behavior,” he said.

There was a lot of talk about solutions to gun violence and black-on-black crime. A large consensus among the panel was any solution will need to be a community effort.

The evidence is just piling up that black lives don’t matter to other black people. So why should white people be made to feel guilty?