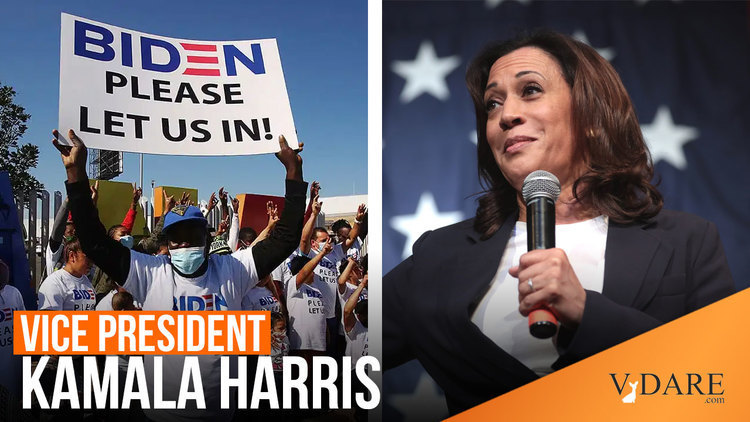 Diversity Hire Flops Even In An Easy Job

(CNN) Worn out by what they see as entrenched dysfunction and lack of focus, key West Wing aides have largely thrown up their hands at Vice President Kamala Harris and her staff -- deciding there simply isn't time to deal with them right now, especially at a moment when President Joe Biden faces quickly multiplying legislative and political concerns.

The exasperation runs both ways. Interviews with nearly three dozen former and current Harris aides, administration officials, Democratic operatives, donors and outside advisers — who spoke extensively to CNN — reveal a complex reality inside the White House. Many in the vice president’s circle fume that she’s not being adequately prepared or positioned, and instead is being sidelined. …

She’s a heartbeat away from the presidency now. She could be just a year away from launching a presidential campaign of her own, given doubts throughout the political world that Biden will actually go through with a reelection bid in 2024, something he’s pledged to do publicly and privately. Or she’ll be a critical validator in three years for a President trying to get the country to reelect him to serve until he’s 86.

Few of the insiders who spoke with CNN think she’s being well-prepared for whichever role it will be. Harris is struggling with a rocky relationship with some parts of the White House, while long-time supporters feel abandoned and see no coherent public sense of what she’s done or been trying to do as vice president. Being the first woman, and first woman of color, in national elected office is historic but has also come with outsized scrutiny and no forgiveness for even small errors, as she’ll often point out.

Defenders and people who care for Harris are getting frantic. When they’re annoyed, some pass around a recent Onion story mocking her lack of more substantive work, one with the headline, “White House Urges Kamala Harris To Sit At Computer All Day In Case Emails Come Through.” When they’re depressed, they bat down the Aaron Sorkin-style rumor that Biden might try to replace her by nominating her to a Supreme Court vacancy.

In the Woke era, the Peter Principle (individuals are promoted to their level of incompetence) no long applies if you have enough Pokemon Diversity Points: after flopping as VP, Harris may be promoted to life tenure on the Supreme Court.