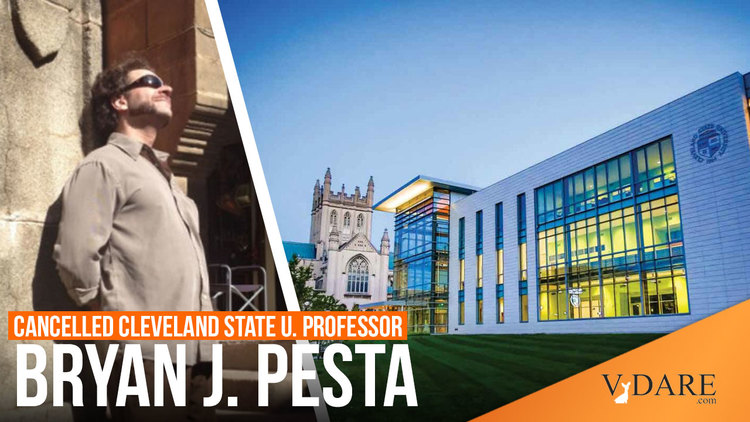 Last month I posted about the egregious cancellation of tenured professor Bryan J. Pesta, who was fired by Cleveland State U. in effect for coauthoring a landmark scientific article on racial admixture and IQ in 2019. (I put considerable effort into a Taki’s Magazine column explicating in less daunting prose a 2021 study that replicated Pesta’s 2019 findings on the even more impressive ABCD database.)

The relationship between the race gap in IQ and DNA has been quite possibly the single most contentious issue in the human sciences since Arthur Jensen’s 1969 Harvard Education Review article. Pesta’s career was targeted for destruction for his role in publishing what might eventually go down in history as the single biggest step forward toward resolving this great debate between scientific titans such as Jensen, Richard Herrnstein, and Charles Murray vs. Stephen Jay Gould, Richard Lewontin, Christopher Jencks, and James Flynn.

Charles Murray and myself have been trying to alert academics that Pesta’s case shows that their ancient right of tenure is no longer secure. As Beria liked to tell Stalin about his stewardship of the NKVD, “Show me the man and I’ll find you the crime.”

4/6 Pesta's work is said to be "shoddy" and otherwise unworthy--but that's what they always say. Go back to the target article and decide whether "shoddy" is your reaction. Bottom line: Solid work on a technically challenging topic can strip your tenure protection

6/6 There are no collateral allegations of sexual misbehavior or racism in Pesta's teaching or any of the other personal failings that universities use as excuses for ridding themselves of their turbulent faculty. Pesta's firing is a pure expression of intellectual censorship.

Dr. Pesta has long tried to maintain a low profile, but having been deprived of his income by violation of his tenure, he has established a Give Send Go account at https://www.givesendgo.com/G9END .

My name is Bryan J. Pesta. I used to be a tenured full professor of management at Cleveland State University (CSU), with top departmental seniority. As a student there many years ago, I’ve also earned three degrees (one BA and two master’s degrees) from CSU. In fact, I have a near continuous presence (as faculty or student) at this school dating back to 1986 (I am old).

This all changed on March 4, 2022, as CSU terminated my (tenured) employment with them.

They “convicted” me of conducting and publishing unethical and racist research regarding my scientific explorations into why Blacks and Whites score differently—on average—when taking IQ tests.

Note, it’s trivially simple to find very smart Blacks and not so smart Whites. It’s frustrating that people have trashed my work and reputation by alleging I believe that ALL members of some race group are smarter than ALL members of some other group.

Note, I had been studying this topic at CSU since 2006. The school never expressed any concerns about the nature of my research until recently. In fact, CSU regularly awarded me (yearly) merit pay wage increases, specifically because of my research.

Note, the average IQ differences in question here are incredibly well-documented by lots of quality data, going back to at least World War I. The differences are also unfortunately rather large, but they predict very important social outcomes (e.g., education rates, income rates, crime rates, and even numerous measures of physical and mental health). As such, I believe we have ethical and moral obligations to figure out what is going on here. I’ve also argued elsewhere, that figuring this out would dramatically improve human well-being for all.

Importantly, CSU did not outright call me a racist for studying all this (though many other students and academics both internal and external to CSU certainly have!). Instead, the school hid behind numerous pretextual accusations that I had mishandled sensitive genetic data, or otherwise committed “academic research misconduct” regarding a specific article that colleagues and I published in 2019 ( https://www.mdpi.com/2624-8611/1/1/34 ).

At one point, fully 21 different allegations of academic research misconduct were “thrown at the wall” against me. I was able defend most of these allegations, but precisely four of them “stuck” with CSU, and I was ultimately fired. However, I will show that CSU’s rationale for these four charges was inane.

Unfortunately, the allegations against me are also very technical and full of jargon. This makes my case rather difficult to comprehend, especially if one lacks knowledge about how scientific research proceeds. I won’t get into the weeds now, but I will soon add a link to my complaint in federal court, once it is officially filed.

Not surprisingly, I have suffered rather severe financial and emotional consequences because of CSU’s illegal firing of me. I am also hated there, and I am completely unemployable in academics anywhere in the USA.

I would sincerely appreciate any financial assistance you might provide here. I’m confident I will prevail, but I need to survive as my suit progresses through the system. In sum, money is nice for sure, but this case is squarely about academic freedom and first amendment rights. Please consider helping me defend myself, and our constitution.

All donations would be completely anonymous, except I will get the donor’s email address in case disputes arise (“I pledged $100 but you took $1,000!” etc.). I would appreciate whatever interested donors are willing to give.