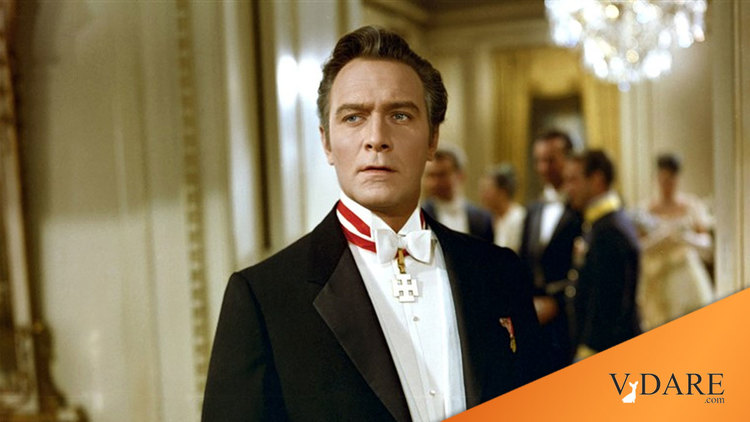 Earlier: NYT: "Knives Out" Is a Giant Microaggression Against My Feelings as a Latina

From my review of the 2019 film Knives Out in Taki’s Magazine:

Knives Out has a few good things going for it, such as an initial setup that sounds promising. Christopher Plummer plays a genius best-selling mystery author who calls his less talented descendants, all of whom live off his immense royalties, together to celebrate his 85th birthday, where he intends to disinherit each of them.

Plummer, who was Captain von Trapp to Julie Andrews’ Maria in 1965, is one of the few actors ever cast to play an 85-year-old when he was significantly older: He turns 90 this week.

He wasn’t very good in The Sound of Music 54 years ago, but outliving your critics could be the best revenge. Remarkably, Plummer may have enjoyed the greatest octogenarian decade in movie acting history, having earned his first three Oscar nominations in his 80s. That’s three of the eight-ever age 80-plus Best Supporting Actor nominations. The others have been Robert Duvall, Hal Holbrook, Max von Sydow, Ralph Richardson, and George Burns, which isn’t bad company.

Plummer’s ancestry is about as distinguished as Canadians get, including a prime minister, various Bethunes, and a Featherstonhaugh (which is famously pronounced FAN-shaw) who was “the owner of one of the first electric cars in Canada.”

Two years ago, when Kevin Spacey got #MeToo’d out of playing zillionaire John Paul Getty after Ridley Scott had already wrapped All the Money in the World, Plummer was called in at the last possible moment and saved the film.

So, Knives Out starts with the greatest old actor of our era in domineering form as a master of devious invention. Unfortunately, writer-director Rian Johnson can’t come up with a likely plot twist for such a compelling character and instead immediately kills him, and his movie, off.