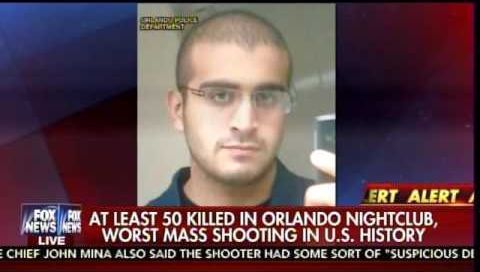 In Nice, France, a Muslim immigrant truck driver deliberately crashes his truck into a French crowd. In Munich, a “German-Iranian” youth, said by German authorities to be something of mental case rather than a formal terrorist asset, commits a mass shooting of his “fellow” German citizens. Then there’s the guy with the ax in the German train, and the other Muslim guy with the machete.

Those are Muslim crimes, presumably done for Muslim reasons, and there have been many of them committed in the United States by (a) Muslim immigrants, and (b) the “absimilated”   children of Muslim immigrants, of whom Omar Mateen is the most recent in the US.

Absimilation, a word coined by John Derbyshire, is the reverse of assimilation. A non-terrorist example of absimilation would be George P. Bush, the son of Jeb and Columba Bush, who famously said (in Spanish, to a gathering of Hispanic Republicans)“ “She [Columba] told me we have to fight for our race, we have to find the leaders who represent us”. (See also George P.’s statements about the Border Patrol here.)

But Immigrant Mass Murder has also been committed by Asians, Africans, Hispanics, and immigrants from the Caribbean. A list I compiled of these killings included killers from Kuwait, Guyana, India, Burma, Somalia, and Vietnam—all in 2015.

What these attacks are is not the kind of international action that George W. Bush tried to solve by invading Afghanistan and Iraq—they’re what VDARE.com calls “Immigrant Mass Murder” and the solution to them is an immigration moratorium.

VDARE.com Editor Peter Brimelow talked about this in Alien Nation (1995) instancing the cases of Jamaican Colin Ferguson, who shot up the Long Island Railroad, the immigrants who took part in the first attack on the World Trade Center, and Mir Aimal Kansi, a Pakistani immigrant who shot random employees at the CIA Headquarters. (He was eventually executed, under Virginia law.)

Reviewers tried to shame him. The late economist Julian Simon was appalled by the use of the examples above, writing “And these are the sort of inflammatory events that he suggests as our destiny” [A Reply To Peter Brimelow, Julian Simon.com, April 30, 1996]

Simon thought mentioning these things was a sign of racism. So did the late Christopher Hitchens, writing during the “Bollinger Bolshevik” phase of his life, in his review of Alien Nation [From Melting Pot To Potpourri, LA Times, May 21, 1995]

Simon called it “textbook demagoguery” to say that gunman Colin Ferguson was motivated by hatred of whites (his attorneys wanted to use “black rage” as a defense). And Hitchens said “the passage about famous ‘immigrant’ atrocities" represented "an appeal to the instinct rather than the reflective capacity."

When you consider how much angst Trump provoked by even mentioning the Mexican propensity for rape—another whole chapter in Adios, America—it may cause heads to explode across the MSM if he takes up this cause.

But he doesn’t have to—as I’ve said, while some of these crimes can be prevented by armed Americans fighting back, and some can be prevented by police, the most effective way of reducing Immigrant Mass Murder is reducing immigration from mass murdering sections of the world.

Trump has already suggested a pause in immigration from Muslim countries. A general immigration moratorium would be even better.