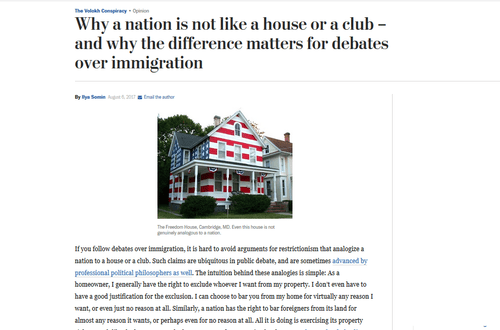 Ilya Somin on "Why a Nation Is Not Like a House"

Why a nation is not like a house or a club – and why the difference matters for debates over immigration
By Ilya Somin
August 6, 2017

If you follow debates over immigration, it is hard to avoid arguments for restrictionism that analogize a nation to a house or a club. Such claims are ubiquitous in public debate, and are sometimes advanced by professional political philosophers as well. The intuition behind these analogies is simple: As a homeowner, I generally have the right to exclude whoever I want from my property. I don’t even have to have a good justification for the exclusion. I can choose to bar you from my home for virtually any reason I want, or even just no reason at all. Similarly, a nation has the right to bar foreigners from its land for almost any reason it wants, or perhaps even for no reason at all. All it is doing is exercising its property rights, much like the homeowner who bars strangers from entering her house. In the words of a leading academic defender of this theory, “My right to freedom of movement does not entitle me to enter your house without your permission… so why think that this right gives me a valid claim to enter a foreign country without that country’s permission?”...

Many people find the house and club analogies to be intuitively appealing. But they quickly fall apart under scrutiny.

The house analogy appeals to the notion of property rights. But, as Georgetown political philosopher Jason Brennan points out, it actually ends up undermining private property rights rather than upholding them:

When we close borders, we aren’t doing the same thing as putting fences around our houses. Suppose there is a neighborhood made up of 10 landowners. 8 out of 10 of them vote to keep out all foreigners. 1 out of 10, Larry, votes to let them in because he wants to rent his house to them. 1 of them votes to let them in because he’s a decent human being, but he doesn’t himself plan to rent his house. When the 8 put up a fence around the neighborhood, they don’t merely keep immigrants off their own property. Rather, they keep the immigrants off Larry’s property, against his will.

Oddly, law professor Somin seems to have not thought about private collective property agreements that restrict individual property owners’ right to do any damn thing he pleases with his property. Rich New Yorkers, for instance, often live in co-ops in which boards have veto power over to whom you can sell your apartment.

Similarly, countless housing developments are managed by Home Owners Associations. Say Larry’s house is one of ten houses in a fancy development where the ten get a vote on what is allowed. Larry wants to convert his garage into a bunkhouse for eighteen illegal aliens in six beds who will hotbunk in shifts. The other members of the HOA vote down Larry’s proposal. Larry’s property rights have been violated!

Moreover, Larry is a hereditary property owner. He inherited his house from his mom. So his hereditary property rights are being violated! (Note that in Somin’s Koch Brothers-subsidized mental universe, hereditary voting rights are bad, but hereditary wealth is very, very good.) Larry doesn’t even live in this development. He has an even better house somewhere else, so what does he care about how his hotbunk scheme would trash the neighborhood? It’s his property right to impose all the externalities he wants on his nominal neighbors.

In reality, property rights exist at multiple levels and people who don’t understand that are usually seen as cranks. Except when the topic is immigration.

Perhaps, however, the government is a kind of super-owner that has the right to supersede the decisions of private owners whenever it passes a law that does so. On that view, the state has all the same rights over land within its jurisdiction as a private owner has over his house. And when the two types of property rights conflict, the state prevails.

Restated in this way, the house analogy could indeed potentially justify almost any immigration restrictions a government might choose to set up. But it can also justify all kinds of repressive government policies that target natives, as well. If a state has the same powers over land within the national territory as a homeowner has over her house, then the state has broad power to suppress speech and religion the rulers disapprove of.

Well, the US has the First Amendment. But the Zeroth Amendment comes first.

In general, I’m struck by how it’s the custom to label anybody who thinks that immigration should be subject to common-sensical limits and regulations is considered a far-right extremist who must be excluded from the public square, while the craziest Koch Bros uber alles ideologues are treated as representatives of reasonable, respectable thinking.